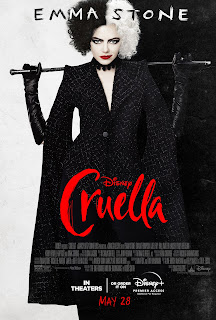 We finally got to watch Disney's latest entry in the live action treatments of 101 Dalmatians characters, which this time moves the focus off the dogs entirely and charts the early misadventures of its title anti-heroine, Cruella de Vil. Early reviews of Cruella (2021) were mixed enough that we chose not to pay for Premiere Access and instead waited for the movie to drop to regular subscriber streaming, but I thought it was a fun romp with a lot going for it in spite of some flaws. For fashion nerds and Emma Stone/Emma Thompson fans there's a lot to love, although it's certainly far afield from the original 1961 Disney movie, which was itself notably different from the 1956 novel by Dodie Smith.

One small detail that endeared the movie's creators to me is the inclusion of a quick but much appreciated tribute to Huntsville native and stage legend Tallulah Bankhead, whose throaty laugh, mannerisms, and infamous London driving inspired the Disney animators who first brought Cruella to life on screen. In an early scene in Cruella, the young Estella is in a room where Tallulah appears on a small television screen, her head thrown back as she delivers her deliciously raucous laugh. The scene on the television comes from Tallulah's most memorable film, Alfred Hitchcock's Lifeboat (1944), in which Tallulah stars as a reporter trapped on a small vessel with other survivors of a German U-boat attack. It's the best place for modern viewers to see the legendary star in action, although she also made memorable appearances in Stage Door Canteen (1943), A Royal Scandal (1945), and the 1960s Batman TV series. 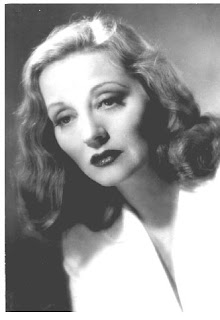 The Cruella of the 1961 Disney film is an absolute villain who schemes to make fur coats out of puppies, but the Cruella embodied by Emma Stone is perhaps more like Tallulah herself, a complicated, flawed, sometimes bad and sometimes mad woman riding a tidal wave of misadventures through an unconventional but always interesting life. In fact, a biopic about Tallulah Bankhead would make an amazing movie and probably present an Oscar opportunity for the actress able to play her. Until some studio decides to make that movie, or adapt one of several stage plays about her life, Cruella is as close as we're going to get.

For more about Tallulah Bankhead:

"Southern Voices on the Silver Screen"

Posted by Jennifer Garlen at 10:34 AM