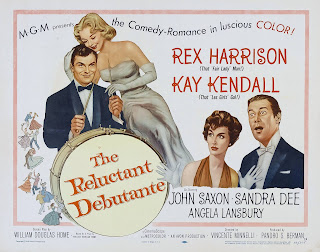 What happens when a modern American girl enters the London debutante season? That's the question posed by The Reluctant Debutante (1958), a romantic comedy from director Vincente Minnelli with more than a few outdated notions hiding under the hem of its ballgown. Set during the final year of the old debutante season, which was ended by Queen Elizabeth the same year the film appeared, this is a story about clashing generations and cultures that is oddly conflict averse, even to the point of giving sexual assault a pass as more of a nuisance than an actual problem. Redeeming its flaws are charming performances from the leads, with real-life couple Rex Harrison and Kay Kendall getting top billing but plucky Sandra Dee bringing plenty of youthful enthusiasm to the otherwise dull debutante scene.

Dee fills the title role as Jane, an American teenager who comes to London to visit her English father, Lord Broadbent (Rex Harrison), and his new wife, Sheila (Kay Kendall). Unfortunately for Jane, Sheila is goaded by her gossipy cousin Mabel (Angela Lansbury) into launching Jane into the debutante season, partly because Sheila never got to be a debutante herself due to World War II. Jane finds the English boys a bore, especially the tiresome David Fenner (Peter Myers), whom Sheila wants Jane to steal from Mabel's daughter Clarissa (Diane Clare) and marry. Instead Jane falls for fellow American and professional drummer David Parkson (John Saxon), a far more attractive contender but not at all what Sheila has in mind.

Much of the humor underpinning the plot revolves around the silliness of the debutante season (though never explicitly addressing its patriarchal treatment of young women as commodities). Jimmy Broadbent is run ragged by the whole affair as his wife whips them from ball to ball in pursuit of  the vicarious social triumph she never had, but the ball scenes run together for the audience as much as they do for the inebriated and sleep-deprived lord. I find it odd that Jane doesn't know anything about debutantes or "coming out" to society, since wealthy Southern families widely practiced this elaborate custom when I was growing up, and here in Huntsville the local symphony guild still indulges in the presentation of well-heeled young ladies as part of its annual events. Jane's ignorance gives the movie an excuse for the exposition, but it hardly seems necessary. Even more troublesome is the cavalier attitude toward David Fenner's attempts to force himself on Jane; it turns out that he's a habitual offender, too, only nobody seems to care because he's exactly the sort of privileged young male who gets away with awful behavior. I'd like the movie better if the ending involved some comeuppance for this repulsive character.

The thin, dated nature of the plot keeps The Reluctant Debutante in the minor leagues of classic movies, but the cast makes it worth watching in spite of its flaws. Harrison and Kendall, who had recently married in real life, have a lovely chemistry together, which the viewer experiences as bittersweet after learning that Kendall would be dead of leukemia a year later, and that Harrison knew she was dying but kept the truth from her. Kendall's Sheila has so much energy and zest for life that she's an irresistible force of nature; Jimmy and Jane never have a chance of withstanding her, and all they can do is go along while trying to nudge her into changing course. Sandra Dee, still at the very start of her film career, has ample sweetness and charm as Jane, and it's easy to see why audiences fell in love with her, while John Saxon is solid if understated as her love interest. Peter Myers is actually quite funny as David Fenner when he's droning on about traffic routes instead of assaulting young women, but most of his later career was in television rather than film. The role of Mabel is a waste of Angela Lansbury's boundless talent, even though she's perfectly capable of leaning into an unlikable character.

If The Reluctant Debutante leaves you eager for more of Kay Kendall, try Les Girls (1957) or Once More, with Feeling! (1960), which would be her final completed film before her death in 1959. Rex Harrison would go on to marry three more times and win the Oscar for Best Actor for his performance in My Fair Lady (1964). Sandra Dee and John Saxon also starred together in The Restless Years (1958) before Dee found fame with Gidget (1959) and Tammy Tell Me True (1961), but Saxon enjoyed the more durable career with nearly 200 roles, many of them in horror films, before his death in 2020 at the age of 83. Vincente Minnelli had won his Best Director Oscar for his previous film, Gigi (1958), which appeared the same year as The Reluctant Debutante, but Father of the Bride (1950) might make for a better double feature of his films.

Posted by Jennifer Garlen at 3:59 PM