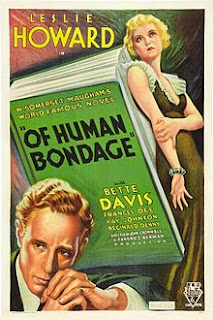 English actor Leslie Howard is best remembered today for his role as Ashley Wilkes in Gone With the Wind (1939), but Howard himself was not a fan of the part or his own casting in it. He said of the role, "I hate the damn part. I'm not nearly beautiful or young enough for Ashley, and it makes me sick being fixed up to look attractive." He also called the novel a "terrible lot of nonsense"and only took the role because he was promised producer credit on a different project by David Selznick. Like Howard, I'm not a big fan of GWTW, but I do love Howard's performances in many other pictures. If you've only seen him as Ashley, you owe it to Leslie Howard to see his work in the movies that he felt were more suited to his talents. Here are five of my favorite Leslie Howard films to get you started.

Howard plays the lead in this adaptation of the novel by W. Somerset Maugham, which also provided a breakout role for Bette Davis as the opportunistic young woman who almost destroys her lover as well as herself. Hapless artist Philip is exactly the kind of dramatic role that suits Howard; he's full of good intentions but not particularly strong against temptation or inertia, an easy mark for a schemer like Davis' Mildred.

Although Howard is not an actor we really associate with the swashbuckler, he delivers a delightful performance in this adaptation of the classic adventure tale. It's especially fun to watch Howard simper in his character's public persona as a vain, shallow fop in order to protect his real passion for rescuing victims of the Reign of Terror. Merle Oberon plays Sir Percy Blakeney's conflicted French wife, who reluctantly agrees to help capture the Scarlet Pimpernel without realizing that her own husband is the hero himself.

Howard had starred in the original stage version of this story before Hollywood decided to film it, and it was his insistence that his stage costar Humphrey Bogart also reprise his role that finally launched Bogart's successful film career. Howard plays a world weary writer whose aimless wandering brings him to a moment of purpose and tragedy on the edge of the Petrified Forest, where he meets both an artistic young girl with dreams of Paris (Bette Davis) and a dangerous gangster at the end of the line (Bogart). Alan Squier is another perfect Leslie Howard role, a mix of weakness, intelligence, and disaffection with the world with whom we sympathize in spite of his obvious flaws. 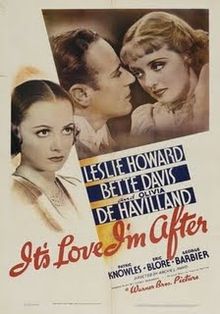 This clever little comedy reunites Howard with leading lady Bette Davis and brings Olivia de Havilland into the mix as a starstruck fan who has fallen in love with Howard's character. Howard and Davis play a pair of actors whose stormy personal relationship spills over into their performances, but even more chaos ensues when Howard agrees to behave as badly as possible to cool his fan's ardor so that her fiance (Patric Knowles) can get her affection back. This delightful, underrated gem is well worth tracking down for fans of any of the three leads.

Howard earned his second and final Oscar nomination for Best Actor for his performance in this film adaptation of George Bernard Shaw's influential play, in which Howard plays the irascible Professor Henry Higgins to Wendy Hiller's Eliza Doolittle. Hiller also picked up an Oscar nod for her role, and the two make for an electric pair as they battle their way through Eliza's transformation from Cockney flower girl to polished society lady. This is another film where Howard gets to demonstrate his talent for comedy, although his Higgins can be so nasty and selfish that he's by far the most unlikable of the characters in this list. If you like My Fair Lady (1964), you definitely need to see this earlier version of the same story.

Leslie Howard's film career was cut tragically short in 1943 when his plane was shot down by the Nazis during a trip to support the British cause against the Germans. Howard had been an outspoken advocate for Britain against the Nazis, leading to speculation that the plane was intentionally targeted because of Howard's presence. In addition to stage roles, he left behind 33 film appearances, so there are numerous other movies where you can see Howard in action, including The Animal Kingdom (1932), Berkeley Square (1933), and Romeo and Juliet (1936).

Posted by Jennifer Garlen at 11:56 AM