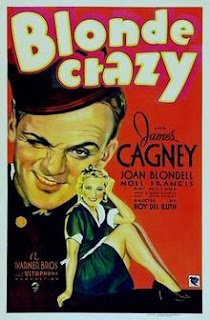 Blonde Crazy (1931) is a Pre-Code cracker that really puts the slap in its slapstick, with Joan Blondell regularly smacking costar James Cagney as the pair make their way through a series of scams and double crosses. Cagney's conman deserves Blondell's tough love; his Bert is too smart for his own good and always on the make, especially when attractive women turn up, but Cagney works the flawed charm of the character for all he's worth, and he and Blondell have excellent chemistry. Director Roy Del Ruth skillfully handles the mix of comedy and drama in this Depression Era tale of likable schemers, which also features Louis Calhern, Ray Milland, and Guy Kibbee.

Cagney plays enterprising hotel bellhop Bert, who uses his job primarily as an opportunity to run crooked schemes. He helps Anne (Joan Blondell) get a position at the hotel in order to chat her up, but when she forcefully rejects his smooth talk he ends up making her his partner instead. The pair work their way up and out of the hotel, but in the city they become entangled with big time conman Dapper Dan (Louis Calhern) and his partner, Helen (Noel Francis). Anne eventually tires of Bert's relentless schemes and falls for the seemingly straight arrow Joe (Ray Milland), but Joe turns out to have a few crooked angles of his own.

There's plenty of tantalizing Pre-Code action in Blonde Crazy, with illicit booze, gambling, adultery, honey traps, robbery, and Joan Blondell's brassiere stuffed full of cash. It's a world of moral relativity that Blondell's character enters somewhat by accident; she's not naturally crooked but is tough enough to handle herself in spite of constant sexual harassment. Anne isn't much bothered by Bert's scams because he usually swindles other swindlers, but she draws the line at outright robbery. When she decides to get out of the game and marry Joe, Bert realizes that he's missed out on his opportunity for a better life with Anne by his side, and he quits, too. Bert's inclination to go straight is then ironically thwarted by Anne's distress when Joe is revealed as the worst crook of them all.

Cagney and Blondell carry the picture with their performances, with Cagney clearly relishing the wolfish energy of his character and Blondell striking just the right balance between cynicism and vulnerability. Bert's favorite endearment, a drawled "Hoooney!" that he often directs at Anne, rolls out of Cagney's mouth with a cocksure smirk that perfectly sums up his personality. Supporting the pair most notably are Louis Calhern and Noel Francis as con artists who make a mark of Bert and cheat him out of his own ill-gotten cash. Their ruthless efficiency makes our protagonists look like angels, but Anne figures out a way to get even with them. Guy Kibbee makes a memorable appearance as one of Bert and Anne's early marks, while Ray Milland pops up fairly late in the picture as the rival for Anne's affections. We don't really see enough of Milland's Joe to form opinions about him until the very end, and it's kind of a shame that Milland doesn't get to work that shifty glint in Joe's eye a little more before his final act of selfish betrayal.

Posted by Jennifer Garlen at 4:07 PM