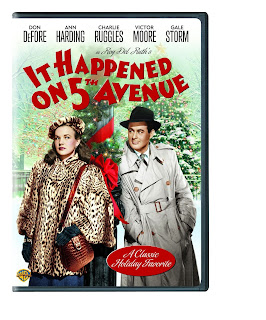 Most holiday movie viewers are familiar with a handful of classic pictures that get a lot of airing this time of year, especially It's a Wonderful Life (1946), but there are actually quite a few seasonally appropriate movies that attract admiration from serious fans. It Happened on 5th Avenue (1947) is not as celebrated as other Christmas classics, but it's a favorite with the classic movie crowd nonetheless, largely because of its lighter take on the well-worn holiday themes of generosity, reformation, and hope. This domestic comedy about a hobo who changes the lives of everyone around him also offers viewers some great performances from lesser known stars, particularly Victor Moore and Charles Ruggles, as well as a chance to see a young Alan Hale, Jr. before his Gilligan's Island days.

Victor Moore stars as Aloysius T. McKeever, a homeless man who moves into a business tycoon's New York mansion when the owner vacates the premises for the winter. Generosity inspires him to invite the newly evicted Jim (Don DeFore) to join him in the house, but both men are surprised when the owner's daughter, Trudy (Gale Storm), turns up, although Trudy adopts a false identity in order to convince them to take her in. Soon the house gains several other occupants, much to McKeever's consternation, while Trudy's father, Mike (Charles Ruggles), and mother, Mary (Ann Harding), also move in under assumed identities at Trudy's insistence.

The action takes place in the last several weeks of the year, with Christmas playing a large part in the story, but really you could watch the movie at any time. The message, however, takes on a particular resonance during the holidays, when the parallels to A Christmas Carol and It's a Wonderful Life become clearer. McKeever, a strange angel indeed, is an agent of redemption and renewal who works his peculiar magic on Mike, Mary, Trudy, and Jim, helping each to gain a new perspective and attain the things that really matter in life. Jim, whom we meet early on, has a George Bailey quality about him; he's full of plans and frustrations, but he needs some intervention - divine or otherwise - to set him on the right path up from his low point. Mike is our Scrooge, a rich man who has lost sight of himself and his family in pursuit of more and more money. Divorced from his wife and somewhat estranged from his daughter, Mike has created a lot of unhappiness in the people around him, but he ends up eating a pretty big slice of humble pie during his incognito residence in his own home.

Most classic movie fans will recognize Victor Moore from his supporting role as Fred Astaire's sidekick in Swing Time (1936), and It Happened on 5th Avenue really puts him in the spotlight. He reflects all the facets of his character's complex personality, and like most great clowns he is both funny and deeply sad. Don DeFore and Charles Ruggles both play it more or less straight against Moore, but Ruggles also has a plum role that lets him explore different moods and emotions. Of the lot, Ruggles has the most dynamic character to play, and his best scenes are those with Ann Harding. The rekindled romance between the older O'Connors has more depth to it than the love affair blooming between the younger couple, and once Trudy's mother shows up much of our attention shifts to Mike and Mary. It's a treat, though, to see Alan Hale, Jr. in a supporting role as one of Jim's wartime pals, even if he doesn't have that much to do.

It Happened on 5th Avenue earned an Oscar nomination for Best Original Story, but without big name stars or constant television airings it has never become a really well-known holiday classic. That makes it a great choice for anyone looking to get beyond the usual menu of holiday fare before the season officially ends, and it would be an excellent New Year entertainment if your plans involve a comfy spot on the couch. See more of silent film veteran Victor Moore in Gold Diggers of 1937 (1937), Make Way for Tomorrow (1937), and Ziegfeld Follies (1945). Look for Charles Ruggles, often credited as Charlie, in Trouble in Paradise (1932), Ruggles of Red Gap (1935), and Bringing Up Baby (1938). Don DeFore stars in Romance on the High Seas (1948), while Ann Harding appears opposite Leslie Howard in The Animal Kingdom (1932). Director Roy Del Ruth made the 1931 version of The Maltese Falcon and other pre-Code pictures like Blonde Crazy (1931) and Lady Killer (1933) before moving on to comedies and musicals like Du Barry Was a Lady (1943).
Posted by Jennifer Garlen at 3:41 PM