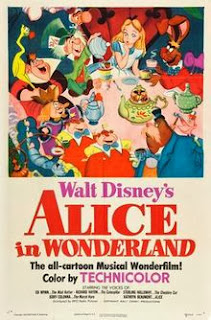 As a longtime devotee of Lewis Carroll, I'm well aware that Disney's Alice in Wonderland (1951) takes some liberties with its source material, but it remains one of my favorite classic Disney films nonetheless. It's certainly one of the weirder Walt pictures, thanks to Carroll's strange characters and penchant for Victorian nonsense, but it paints a vibrant, memorable picture, and it also offers some fiendishly catchy tunes and a number of great voice performances from classic character actors like Sterling Holloway and Ed Wynn. More importantly, Alice in Wonderland breaks away from Disney's princess in peril tradition to depict a determined heroine making it through her adventures all by herself, without a single prince in sight.

Like Carroll's original story, the Disney adaptation follows the adventures of young Alice (Kathryn Beaumont) as she chases the White Rabbit (Bill Thompson) into Wonderland. Once there, Alice encounters all sorts of odd inhabitants, including the grinning Cheshire Cat (Sterling Holloway), the Mad Hatter (Ed Wynn), and the Caterpillar (Richard Haydn). She also makes the acquaintance of the murderous Queen of Hearts (Verna Felton), who invites Alice to play croquet but also threatens to cut off her head. Alice wants to return home, but first she must stand trial before the Queen's court and confront her strange adversaries.

Carroll's two books, Alice's Adventures in Wonderland and Through the Looking-Glass, revel in in-jokes and clever wordplay, and most of this gets streamlined or eliminated in the Disney film, although the core story about a girl's adventure remains the same. Alice is grappling with the strangest adventure of all, that of growing up, and to her the world of adults is as bizarre and incomprehensible as anything Wonderland has to offer. Like Wendy in Peter Pan, Alice stands on the edge of leaving childhood behind, but unlike Wendy Alice doesn't have to play second fiddle to any boys. She must navigate complex social rules, conquer etiquette, and learn to deal with false friends. That might not sound as exciting as fighting pirates or slaying a dragon, but for Alice it turns out to be quite a challenge, and her reward is not a prince but a reclamation of herself and her place in the real world. In an era when most Disney heroines passively waited for their princes to save them, Alice's story makes a very refreshing change.

Aside from its proto-feminist heroine, Alice in Wonderland offers plenty of charms in its bouncy tunes and crazy characters. "A Very Merry UnBirthday," "I'm Late," and even "Painting the Roses Red" have an infectious energy that makes them irresistible earworms (don't let your kids watch the picture if you aren't prepared to listen to them sing the songs for days afterward). Kathryn Beaumont, who would also provide Wendy's voice for the 1953 Peter Pan, gives Alice a very proper English accent without laying it on too thick, but the veteran character actors steal the show, especially Sterling Holloway as the mischievous Cheshire Cat. Ed Wynn, Verna Felton, and Richard Haydn are joined by Heather Angel, Thurl Ravenscroft, J. Pat O'Malley, and The Mellomen as some of Wonderland's other residents, and hardcore Disney fans will have no trouble recognizing most of their voices.

Alice in Wonderland has been adapted many times both before and after the 1951 Disney version, with the most recent big screen treatment also coming from Disney in 2010. For the sake of comparison, you might also have a look at the 1985 and 1999 TV movies, although the 1933 version might appeal more to classic movie fans, since it features W.C. Fields as Humpty-Dumpty and Cary Grant as the Mock Turtle (Sterling Holloway is in it, too, but in this earlier outing he plays the Frog). Brooke Shields plays Alice in a quick but crazy adaptation on a 1980 episode of The Muppet Show, and that's a fun one if you can track it down. Listen for Verna Felton as unpleasant matriarchal types in Dumbo (1941) and Lady and the Tramp (1955) and as the sweeter Fairy Godmother in Cinderella (1950). Don't miss Ed Wynn in Mary Poppins (1964), and be sure to appreciate Sterling Holloway's distinctive rasp in Dumbo, Mickey and the Beanstalk (1947), and, of course, the original Disney stories about Winnie the Pooh.
Posted by Jennifer Garlen at 4:58 PM