Comedies about mistaken or switched identity go all the way back to the Ancient Romans and the Menaechmus brothers, but the most familiar iteration of the plot might be Mark Twain's The Prince and the Pauper, which has been adapted, revised, and parodied so many times that even Barbie and Mickey Mouse have had a go at it. The 1939 musical comedy, Honolulu, clearly draws from this much-visited well of inspiration, although in this case neither of the identical strangers could be considered a pauper, since one is a movie star and the other owns a Hawaiian pineapple plantation. Honolulu doesn't break any new cinematic ground, especially in its dated racial stereotypes, and its plot is feather light, but it's as frothy a concoction as any sweet tropical treat, and fun performances from Robert Young, Eleanor Powell, and Gracie Allen make it well worth the short time it takes to watch. 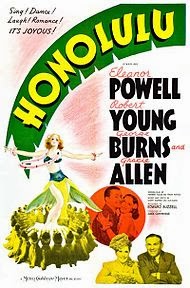 Robert Young plays movie idol Brooks Mason and plantation owner George Smith, who exchange places so that Mason can relax in Hawaii while Smith gets some cosmopolitan polish in New York. On the boat over to the islands, Mason meets dancer Dorothy (Eleanor Powell) and courts her as George Smith, only to find his romantic plans complicated by Smith's off-and-on fiancee, Cecelia (Rita Johnson). Chaos ensues, especially as "Brooks Mason" is repeatedly mobbed by fans and "George Smith" is jailed for theft, but the biggest challenge is getting both men paired up with the right partners before the wrong George says "I do" to Cecelia at the altar.

Robert Young has the most to do in the picture, since he plays not one but two protagonists, but Eleanor Powell gets top billing, and her dance numbers are really the movie's chief attraction. The Hawaiian hula sequence, which is the most famous bit, is really a terrific performance by Powell, and her duet with Gracie Allen, who plays her sidekick, Millie, is also great fun. Powell's tribute to Bill Robinson, done in blackface, proves more troublesome for the modern viewer, but it makes an interesting counterpoint to Fred Astaire's similar performance of "Bojangles of Harlem" in Swing Time (1936). In between Powell's dance routines, Robert Young provides comedy and some semblance of a romantic plot, although the best doppelganger gags occur early in the film.

You won't get much Hawaiian atmosphere from the sound stage sets, but Honolulu makes up for its phony backdrops with a chance to see Burns and Allen on the big screen. The comedy duo made quite a few shorts and a couple of features together throughout the 1930s, but Honolulu would be the last movie to star both of them, and we have to wait until the very end to see them actually in a shot together. Allen has a lot more screen time than her wisecracking spouse, and she's a riot, especially during a shipboard sequence when a costume party inspires her to dress up as Mae West and perform "The Leader Doesn't Like Music" with The King's Men dressed as The Marx Brothers.

Eddie Anderson and Willie Fung both get relegated to their usual comic relief roles as stereotyped domestics, but at least the movie credits both actors for their work. Don't miss Sig Ruman and Ruth Hussey in small roles; Hussey plays the leading lady in the movie scene that opens the picture. Director Edward Buzzell also made Marx Brothers films like Go West (1940) and Esther Williams vehicles like Neptune's Daughter (1949). See more of Eleanor Powell in Born to Dance (1936), Lady Be Good (1941), and Ship Ahoy (1942). Robert Young also stars in The Canterville Ghost (1944), The Enchanted Cottage (1945), and Crossfire (1947).

You can find Honolulu and several other Eleanor Powell movies currently streaming on Warner Archive Instant.
Posted by Jennifer Garlen at 1:00 PM