This post is part of the Christmas Movie Blogathon hosted by Family Friendly Reviews. Check out the links for all of the related posts! 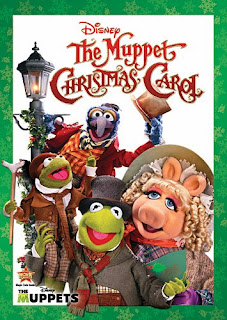 Charles Dickens' A Christmas Carol has been adapted for the big screen many times, and almost all versions have their merits, but as both a former English Literature professor and a Muppet scholar I have to admit that The Muppet Christmas Carol (1992) is far and away my favorite take on the classic holiday tale. Despite its alterations for the sake of its furry, feathery, and felt-made cast, The Muppet Christmas Carol is surprisingly faithful to the spirit of the original text, and it goes one better than many more traditional adaptations with its inclusion of a Dickensian narrator and its representation of the three Christmas Ghosts.

Michael Caine takes the lead role as Scrooge, playing a rather demented and imposing version of the old miser, while the Muppets fill most of the supporting roles. Kermit the Frog plays long-suffering Bob Cratchit, with Miss Piggy as his loyal if temperamental spouse, and Fozzie Bear appears as Fozziewig, Scrooge's generous old employer. Statler and Waldorf split the Marley role into a duo (Jacob and Bob), and other familiar Muppet characters make appearances throughout the picture. The Great Gonzo lives up to his name as Charles Dickens, who narrates the story with the help of Rizzo the Rat. The collected cast of human and Muppet players goes through a more or less familiar version of the story, with songs and comedy added to bring the text in line with the usual Muppet style.

Several elements of this version stand out. First, Gonzo's performance as Charles Dickens is one of his best roles, combining the wry narratorial voice of the original story with the Muppet's inherent weirdness for a startlingly funny but effective commentary on the action as it unfolds. "I know this story like the back of my hand," Gonzo boasts to Rizzo. When pressed to prove it, he then covers his eyes and begins to describe his hand instead of telling the story. Rizzo is, as always, a hilarious sidekick to the blue daredevil; Dave Goelz and Steve Whitmire had already perfected their comic chemistry with the two characters by the time this film was made, and their dialogue together makes for the movie's most quotable lines. More importantly, Gonzo's presence returns to the story something that is missing in most adaptations. We get back lines like, "He was a tight-fisted hand at the grindstone, Scrooge!" and "Darkness was cheap, and Scrooge liked it." Dickens' narrator is a crucial part of the story's humor and appeal, but most versions lose him in the dramatic revision.

The Ghosts are another outstanding element of the Muppet adaptation. Specially created for the film, the Ghosts are strikingly faithful to Dickens' descriptions of them, especially the luminous Ghost of Christmas Past, who floats hauntingly thanks to a special shooting technique that involved the puppet being filmed in a tank of oil. The Ghost of Christmas Present lacks Ignorance and Want hidden beneath his robes, but his forgetful good humor and size make him a delightful presence, combining elements of both Father Christmas and Christ. The Ghost of Christmas Yet to Come is so scary that Gonzo and Rizzo abandon the picture until the finale, but the film's creators make the right call by keeping the gravitas and foreboding of those scenes. Taken together, the Ghosts are not only marvels of puppetry innovation but also compelling realizations of Dickens' figures, more spectral and miraculous than human actors because the medium liberates them from mortal constraints.

Like many family friendly adaptations of the story, The Muppet Christmas Carol does shift the focus of Dickens' text by casting its primary figure, Kermit, as Bob Cratchit. This encourages us to see ourselves in Bob and to see him as the story's central figure (the Mickey Mouse version does the same thing). Michael Caine, however, does such a terrific job as Scrooge that we never lose him among the Muppets, and that helps us to keep our attention where it's supposed to be. Dickens never wanted us to see ourselves as Bob Cratchit; his story depends on us understanding that we are Scrooge, selfish and querulous even in the face of our own salvation. Caine revels in Scrooge's meanest lines, but he also conveys nostalgia, regret, and tenderness in the character, all emotions that have to exist within him already in order to be called forth by the Ghosts' visitations. Bob is an object to rouse Scrooge's dormant pity, but A Christmas Carol isn't his story; he has no dynamic narrative arc to pursue. For contrast, you might watch Kermit taking on the George Bailey role in It's a Very Merry Muppet Christmas Movie (2002), which revises It's a Wonderful Life (1946) and prefigures the plot of The Muppets (2011) in quite a few ways.

For more literary Muppetry, you might try Muppet Treasure Island (1996), which features Tim Curry as Long John Silver. Brian Henson, who directed both adaptations, is of course the son of Muppets creator Jim Henson, who died in 1990. The Muppet Christmas Carol was the first feature made after his death, which gives it a certain bittersweet quality for lifelong Muppet fans. Head back to The Muppet Movie (1977) for the first big-screen Muppet adventure, or flash forward to The Muppets (2011) to see what Disney is doing with the characters now. Muppets Most Wanted, the newest Muppet movie, is due out in 2014. 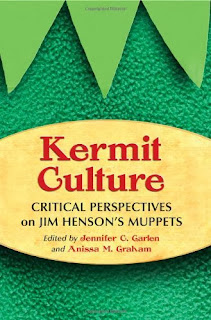 Can't get enough Muppet-inspired criticism and commentary? I really am something of an expert on the subject. Check out Kermit Culture: Critical Perspectives on Jim Henson's Muppets and The Wider Worlds of Jim Henson. Both books were published by McFarland and are available in paperback and Kindle editions on Amazon. If movie reviews are more your thing, try Beyond Casablanca: 100 Classic Movies Worth Watching, which is also in both paperback and Kindle versions on Amazon.

Posted by Jennifer Garlen at 12:35 PM