Classic Films in Focus: I WAKE UP SCREAMING (1941) 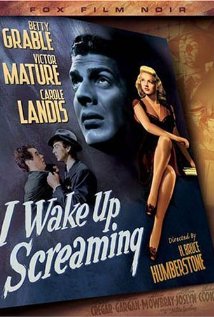 Betty Grable is not an actress one normally associates with film noir, but she makes an unusual foray into Dark City in H. Bruce Humberstone's 1941 picture for Fox, I Wake Up Screaming. Nobody ever actually does wake up screaming in the movie, and the ill-chosen title is not the only weakness in evidence, but the picture is watchable and offers an interestingly twisted tale of passion, murder, and suspense.

Grable plays good girl Jill Lynn, whose beautiful and ambitious sister, Vicky (Carole Landis), has just been murdered. The chief suspect in the case is Frankie Christopher (Victor Mature), a promoter who was helping Vicky become a star, but Frankie insists that he had nothing to do with Vicky's death. Both Frankie and Jill fall under the relentless watch of imposing cop Ed Cornell (Laird Cregar), who refuses to believe that Frankie might be innocent. As they struggle to find Vicky's real killer, Frankie and Jill must come to grips with their feelings for one another, and their blossoming romance might prove the weakness that finally helps Cornell to pin the crime on Frankie.

The dialogue in I Wake Up Screaming can't compare to that of the real masterpieces of noir, where lines get thrown like so many daggers in a deadly circus act. Double Indemnity (1946) it is not. The film was adapted from a novel by Steve Fisher with the screenplay by Dwight Taylor, who mostly wrote scripts for Fred Astaire and Ginger Rogers but also penned Pickup on South Street (1956), a much more highly regarded example of noir style. There's also an obsessive and rather bizarre use of an instrumental version of "Somewhere Over the Rainbow" for the film's musical backdrop. You'll get tired of hearing it by the time the picture ends.

On the plus side, Laird Cregar is a smoldering menace as the relentless cop, and Elisha Cook, Jr., always great, appears in a small but crucial role. Victor Mature is fun to watch, although his heavy features constantly raise suspicion that he might actually be the killer, and that might be the whole point of casting him in the first place. Carole Landis makes a lovely and cold-hearted foil to Grable's good sister, and Alan Mowbray and Alyn Joslyn have interesting roles as Frankie's slippery friends.

An earlier version of this review originally appeared on Examiner.com. The author retains all rights to this content.
Posted by Jennifer Garlen at 4:57 PM