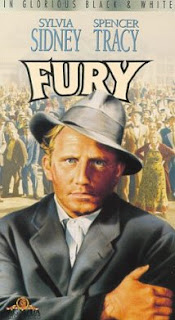 Fury (1936) marks director Fritz Lang's debut as a Hollywood filmmaker, although by the time he arrived in the United States he had already made important films like Metropolis (1927), M (1931), and The Testament of Dr. Mabuse (1933). Despite its key position as a transitional work for the director, Fury is not as widely known today as some of Lang's other American pictures, the most popular being his 1953 noir classic, The Big Heat, but Fury is nonetheless an excellent film, filled with gripping performances and all of the director's favorite themes.

Spencer Tracy stars as the ill-fated Joe Wilson, whose long-awaited union with his girl, Katherine (Sylvia Sidney), sets him off on a road trip into tragedy. Mistaken for a kidnapper and tried by local gossip, Joe becomes the victim of a violent mob so intent on murdering him that they burn down their own jail with Joe locked inside. Joe secretly survives the ordeal, but his faith in human decency is shattered, and  he now cares only about getting revenge on the people who tried to kill him. When the court attempts to try the leaders of the mob, the townsfolk close ranks, but Joe manipulates his two brothers and Katherine to affect the outcome of the trial.

For Tracy, the role of Joe bears some similarities to his later performance in Dr. Jekyll and Mr. Hyde (1941), where we also see him play two sides of a single personality. The original Joe is a straight arrow, a quintessential good guy who looks after his brothers and takes in a little dog out of sympathy for a helpless fellow creature. The post-fire Joe is a shadow consumed with rage, ready to watch nearly two dozen people die in order to satisfy his need for retribution. Tracy, always a terrific actor, makes both sides of Joe credible, although his craggy features are most effective in the later scenes, when we see him with burning eyes and a grim, pitiless expression. Sidney, with her delicate features and huge, startled eyes, makes a perfect foil to this later version of Joe, even as Lang reveals her to be smart enough to put two and two together, no matter how emotionally wrecked she is in the wake of seeing her beloved burned alive.

Like M, The Woman in the Window (1944), and Scarlet Street (1945), Fury reveals Lang's interest in the psychological, particularly various manifestations of guilt. The lynch mob leaders mostly bury their guilt, except for one memorable courtroom outburst, but Lang relishes the opportunity to confront them with themselves when the district attorney uses film footage of the mob to show what each member did that night. Joe also has to grapple with guilt as it becomes apparent that he will get the vengeance he desires in spades. Can he live with himself if the townspeople die?

In addition to Tracy and Sidney, look for Walter Brennan, Frank Albertson, Bruce Cabot, and Walter Abel among the cast. The biggest star in the whole movie, though, might be Terry, the little dog who plays Rainbow. You know her better as Toto in The Wizard of Oz (1939). For more of Spencer Tracy's best work from the late 1930s, see Libeled Lady (1936), Captains Courageous (1937), and Boys Town (1938). Sylvia Sidney is best remembered today for her role in Hitchcock's Sabotage (1936), but she had a long career that included many later television roles.
Posted by Jennifer Garlen at 3:13 PM