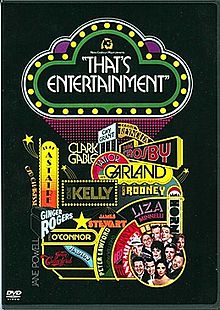 One of the highlights of the new Best of Warner Bros. Musicals Collection is the 1974 montage picture, That's Entertainment!, which showcases some of the greatest moments in movie musical history, although admittedly with an MGM slant. For fans of the genre, the picture is a welcome chance to revisit favorite songs and stars and also catch a few more obscure moments from classic musicals. It's a sentimental and satisfying trip down memory lane, made even more nostalgic by the presence of many now departed stars as the hosts and hostesses of our journey.

The film goes all the way back to the early days of movie musicals and moves back and forth as it considers particular films and stars who have been influential in defining the genre. Not surprisingly, Fred Astaire and Gene Kelly get the lion's share of the attention, although Judy Garland and Liza Minnelli also have prominent spots, and non-musical stars like Jimmy Stewart and Elizabeth Taylor also make appearances. Short introductory segments filmed mostly on the now destroyed MGM backlot serve to organize the musical clips, which feature Singin' in the Rain (1952), Royal Wedding (1951), Meet Me in St. Louis (1944), The Harvey Girls (1946), and Good News (1947), among many others.

While the film includes all of the expected hits, the more offbeat segments might well appeal the most to musical fans, since here are numbers both unexpected and seldom seen. Clark Gable croons "Puttin' on the Ritz," and Jimmy Stewart and Joan Crawford both have their musical moments reviewed. Stewart provides some context for these numbers by recalling how eager the MGM studio heads were to try every performer out in a musical or two, regardless of actual talent for song and dance. Luckily, MGM found plenty of real ability in the stars who would become synonymous with the genre. 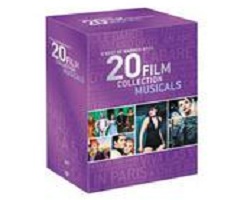 Most of the films included in the Best of Warner Collection are full-length musical narratives, including The Jazz Singer (1928), The Wizard of Oz (1939), Yankee Doodle Dandy (1942), and, naturally, Singin' in the Rain (1952). Even with 20 films in the set, however, there's a lot that has to be left out, and That's Entertainment! helps to fill in the gaps and provide an overview of the musical's history and appeal. The picture was a big enough success to spawn two theatrical sequels and a 1995 direct-to-video release, and you might track those down if you enjoy the original.

For more classic movie musicals, check out the rest of the films included in the Best of Warner Bros. 20 Film Collection, or use That's Entertainment! as a starting point to guide you on to the films of Fred Astaire, Gene Kelly, Judy Garland, Bing Crosby, Esther Williams, and June Allyson. For more Warner musicals, try Footlight Parade (1933) and other Busby Berkeley productions of the 1930s.

Disclaimer: Warner Bros. has provided a review copy of this film free of charge to the reviewer. No promise of a positive review is made to the studio in exchange for this product.
Posted by Jennifer Garlen at 4:07 PM