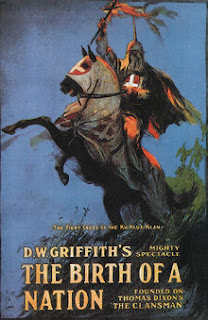 D.W. Griffith's silent Civil War epic is one of those films that every serious student of film probably feels obligated to sit through at some point, but for the modern viewer The Birth of a Nation (1915) is a very hard pill to swallow. Lauded by film critics who praise its technique while deploring its politics, Birth is regarded as a landmark in cinema history, and it's true that the movie was a huge success in its own day and offers a number of visually striking sequences that have become part of film's larger vocabulary. It also more or less single handedly revived the KKK, and it's hard to watch the movie with this knowledge and not wonder how much blood was spilled thanks to the pernicious ideals paraded before viewers' eyes.

Based on Thomas Dixon's 1905 novel, The Clansman, The Birth of a Nation follows the fortunes of two families during and after the Civil War. The Stonemans are the Northern family; their patriarch (Ralph Lewis) becomes a powerful advocate for abolition, partly because of his dangerous relationships with biracial opportunists. The Camerons hail from the South, and the two families are entwined by the love affairs and shared sufferings of their children, including the troubled courtship of Ben Cameron (Henry B. Walthall) and Elsie Stoneman (Lillian Gish). After the war ends, racial conflict leads to violence and upheaval, leading to the formation of the Ku Klux Klan to help whites reassert their power over the former slave population.

I'm not particularly interested in acting as an apologist for Griffith or Dixon for this maddeningly racist fairy tale of white paradise lost and regained. Many other film critics with much greater credentials, including Roger Ebert, can list the virtues of Griffith's story-telling and his use of cross-cutting, set pieces, and other important machinery of the medium. Yes, the action sequences are well-made and exciting, although at a good three hours the movie is long by anybody's standards, and some of the re-used shots in particular might have been edited to pick up the pace. Lillian Gish and Mae Marsh are lovely and effective, and the other younger characters are also interesting, but the elder Stoneman and the antagonists often devolve into mere caricatures.

Beyond these considerations, however, lies the real problem. Griffith presents a story in which the KKK are the heroes, riding to the rescue of terrified whites as savage, subhuman blacks run riot. If you aren't a member of a white supremacy group, it's horrifically uncomfortable to be asked to cheer, "Here comes the Klan!" when the riders turn up, their white sheets billowing out behind them. One might laugh nervously at the ridiculous situation, or turn the film off in disgust, or watch on with a sick sinking feeling in the pit of one's stomach. At that point, the technical merits of the movie disappear from the equation. The message overrides them.

Griffith might not have meant for it to happen, but it remains important that The Birth of a Nation brought the KKK back into the South with a vengeance. It had died out towards the end of the 19th century, and perhaps it would have stayed dead if not for this one picture. That's a terrible example of the impact a film can have on history, given that the rebirth of the KKK certainly led to the deaths of many African-Americans in the South in the first half of the 20th century. According to this PBS article, "In Mississippi alone, 500 blacks were lynched from the 1800s to 1955." Across the South, two to three African-Americans were lynched every week, not in fiction or on movie screens, but in real life, by real men who saw themselves as the saviors of their race. Beyond its offensive stereotypes and blackface antics, Birth has blood on its reels, and no amount of technical innovation can make up for that.

I can't really recommend that you watch The Birth of a Nation unless you are just very committed to checking that box in your film education. You can see a shorter, less repulsive example of Griffith's style in Broken Blossoms (1919), which also stars the luminous Lillian Gish. If you really want to explore the evil side of cinema, you might also subject yourself to Leni Riefenstahl's Nazi propaganda film, Triumph of the Will (1935). For a silent Civil War film that avoids these thorny issues while still romanticizing the South, try Buster Keaton's The General (1927).

Posted by Jennifer Garlen at 5:49 PM