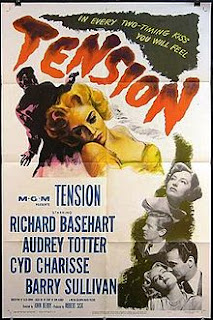 Noir films like The Maltese Falcon (1941) and Double Indemnity (1944) hover at the very top of our culture's cinematic consciousness, but many of the B movies that helped to define classic noir style have not fared as well. Directed by John Berry, Tension (1949) is a more obscure example of noir, but it remains an extremely entertaining film, in large part because of Audrey Totter's portrayal of an outrageously vicious femme fatale. For those who are new to noir, Tension might well be a perfect primer of the conventions and characters that form its hallmarks, and seasoned aficionados will find much to admire in this short, snappy picture, as well.

Totter dominates the screen as the incorrigible Claire Quimby, a two-timing wife whose boredom with her meek pharmacist husband (Richard Basehart) leads her to look for greener pastures. When Claire runs off with the loutish Barney Deager (Lloyd Gough), Warren Quimby vows to take his revenge on Deager and thereby prove himself manly enough to win his wife back. Quimby assumes a new identity in order to facilitate his murderous plans, but he begins to question his decision when his attractive new neighbor (Cyd Charisse) presents him with a second chance at love. After Deager turns up dead, both of the Quimbys must deal with the consequences of their actions and the investigation of a dogged police detective (Barry Sullivan), who senses the tension between them.

Basehart makes for a sympathetic hero, particularly once he wises up to the fact that his wife is no good, and his early scenes as the milquetoast doormat also have their charms. Cyd Charisse, long and lovely, serves as an elegant foil to Totter's heartless vamp, but the audience's attention belongs to the bad girl, nonetheless. Totter really works the image of the femme fatale as a creature of base desires; there is nothing refined or even very mysterious about her. Even the way she eats a sandwich communicates the essential aspects of her character - greedy, crass, and wasteful. Utterly faithless and interested only in material pleasures, she has no patience with her husband's domestic fantasies, although she proves more than willing to use him once Deager turns up dead. In one particularly telling scene, she flatly rejects Warren's hard-earned purchase of a family home, scorning the roles of mother and wife that he assumes she must desire. Unwillingly even to leave the car, she drowns out his mild protestations with the vulgar blast of the auto horn. In every scene, she's delightfully horrid, trampy, and false, making it that much more awful that a nice guy like Warren is seriously planning to murder another man just to get her back.

An earlier version of this review originally appeared on Examiner.com. The author retains all rights to this content.
Posted by Jennifer Garlen at 3:34 PM