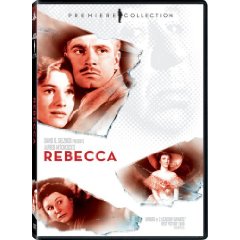 Rebecca (1940), adapted from Daphne du Maurier's hugely successful novel, looks like it ought to be a winner, given that it was directed by Alfred Hitchcock, produced by David O. Selznick, and performed by Laurence Olivier and Joan Fontaine. Indeed, it was a winner at the 1941 Academy Awards, where it snagged the Best Picture prize from contenders as worthy as The Philadelphia Story, The Grapes of Wrath, and Kitty Foyle. It boasted a total of eleven nominations, including a second win for Best Cinematography in a black-and-white picture. Still, there's something missing from Rebecca, something essential that would have made it truly a great film and not merely a great success. Despite its excellent pedigree and shower of nominations, it disappoints; one wants to like it, and there are clearly some fine things in it, but as a whole it lags, drags on, and shuffles its feet until the delirious Gothic tension of the original novel is all but lost.

The screenplay sticks remarkably close to the original material. A nameless young woman (Joan Fontaine), the paid companion of a disagreeable old busybody (Florence Bates), falls in love with Maxim de Winter (Laurence Olivier), a wealthy but emotionally withdrawn widower. Maxim marries the girl and carries her away to his fabulous estate, Manderley, where she encounters the lingering presence of the previous Mrs. de Winter, Rebecca, throughout the house, particularly because Rebecca's insanely devoted servant, Mrs. Danvers (Judith Anderson), runs the place as if Rebecca were still there. Little by little, the new Mrs. de Winter uncovers bits and pieces of the first Mrs. de Winter's story, leading to a dramatic revelation from Maxim about Rebecca's true nature and the circumstances of her mysterious death.

The film's fidelity to the novel was something that Selznick insisted upon; the opening credits even identify Rebecca as a "picturization" of the novel. It was a source of conflict between the producer and his director, and it affects the whole film. Hitch wanted to capture the mood of the literature without slavishly recreating it, but Selznick pretty much got his own way, and Rebecca suffers because of that. It is much too long, with too many shots of Joan Fontaine crying and wringing her hands helplessly, and not nearly enough of Mrs. Danvers, who is absolutely the best thing going on in the whole picture. The novel's tension and insidious power stemmed from its deeply subjective, interior perspective of the heroine's thoughts, something that could not be translated onto film. In the novel, the spectral Rebecca exists solely within her replacement's imagination, but there she takes insidious shape, almost possessing the heroine at times. In the adaptation, Rebecca lacks this power; we see her initials and her things, but we don't feel her the way that we do in du Maurier's text. If Selznick had allowed Hitchcock to recreate that delightful paranoid sensibility by changing the screenplay more, it would have made a better movie. As it is, watching Rebecca is a lot like viewing a series of illustrations for the novel; you see the scene but miss what's going on behind it.

None of this is really the fault of the performers, but it limits what they can do. Olivier is too distant and cold by half; he had reportedly wanted Vivien Leigh for the heroine's part, and perhaps his coldness is as much toward Joan Fontaine as it is toward her character. Fontaine's heroine spends most of the movie in tears, cringing awkwardly at every social encounter and adoring Maxim with the irritating enthusiasm of a puppy. It's never clear why we are supposed to believe that Maxim loves her, except perhaps in that she is the opposite of Rebecca. I much prefer Fontaine as the tougher title character in Jane Eyre (1944), an interesting casting choice since the novel Rebecca was itself a revision of Charlotte Bronte's Gothic masterpiece. 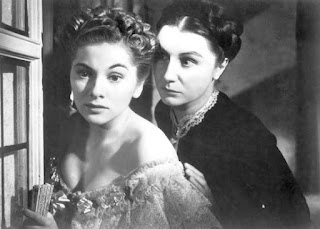 In the supporting cast, George Sanders gives a good show as Rebecca's too-intimate friend, Jack Favell, and Florence Bates is perfectly horrid as the heroine's awful employer. The most stirring performance of the whole movie is given by Judith Anderson as the villainous Mrs. Danvers; the terrible light that comes into her eyes when she speaks of the dead Rebecca is truly chilling, and the final scene of Mrs. Danvers in the burning Manderley is terrific, even if it doesn't appear in du Maurier's novel. Anderson's performance helps to set the tone for many Gothic housekeepers to come, and you can definitely see her influence in Rosalie Crutchley's turn as Mrs. Dudley in The Haunting (1963).

Many classic movie fans adore Rebecca, and I'll admit that my familiarity with the novel might be a major factor in my own less enthusiastic response to the film. If you're looking for more Gothic romance, try Dragonwyck (1946) with Gene Tierney and Vincent Price. See more of Joan Fontaine in The Women (1939), Suspicion (1941), and Ivanhoe (1952). Olivier is best remembered today for literary films like Wuthering Heights (1939), Pride and Prejudice (1940), and Hamlet (1948). For more of the great Judith Anderson, try Laura (1944) and The Strange Love of Martha Ivers (1946).

An earlier version of this review originally appeared on Examiner.com. The author retains all rights to this content.

Posted by Jennifer Garlen at 12:04 PM