The world is staying home this spring as a pandemic spreads through our countries, leaving many people to cope with the unfamiliar experience of social isolation. Literature and film are suddenly lifelines to adventure, community, and knowledge, and some of them can really teach us a few things about how to live while cut off from the rest of the world. As I keep up with the news this month I find myself thinking especially about Robinson Crusoe, Daniel Defoe's iconic castaway and master of social distancing. Defoe's original novel, published in 1719, has inspired many subsequent books, films, and television series, and there's never been a better excuse or time to explore them. Here are some of my favorite Robinson Crusoe revisions and adaptations. 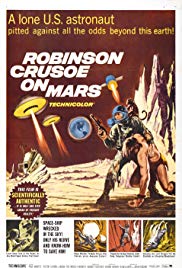 1) Robinson Crusoe on Mars (1964) - This is probably my favorite of the films inspired by the novel because it takes Defoe's story and mixes it into 60s sci-fi, Paul Mantee stars as the castaway astronaut on the red planet, but you'll also find Adam West in a supporting role early in the film. Try this one if you're already a fan of classic sci-fi or you really loved The Martian (2015)!

2) The Martian (2015) - Matt Damon's turn as a castaway astronaut on Mars isn't a direct adaptation of Robinson Crusoe, but it certainly owes a lot to Defoe, and it makes a perfect double feature with Robinson Crusoe on Mars. When he gets left behind on Mars, Mark Watney uses science and creativity to survive. You'll really learn to appreciate potatoes!

3) Cast Away (2000) - If you want to come back to earth for your isolation, try the Tom Hanks hit in which a FedEx employee survives a plane crash and is stranded on a remote island. This is very much a modern Crusoe tale, although Crusoe's eventual companion, Friday, is a lot more useful than the soccer ball that Hanks' character names Wilson. Hanks, of course, has been in the news recently after being diagnosed with COVID-19 while filming in Australia, but I hope his time in medical isolation was a lot less traumatic than being marooned on an uninhabited island! 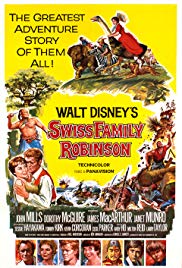 4) Swiss Family Robinson (1960) - Defoe's original story inspired the 1812 family classic, which is also worth handing to your kids while they're at home, but the 1960 Disney film adaptation is probably the best known of the numerous film treatments. John Mills and Dorothy McGuire star as the parents of a shipwrecked family with several sons, and this one makes a good family pick for kids who are too young for the films I've already listed. Best of all, you can stream it on Disney Plus if you're already sick of the two Frozen movies!

5) Lost in Space (1965-1968) - The Crusoe family tree adds another branch with this 60s TV revision of Swiss Family Robinson, which gave the world the iconic line, "Danger, Will Robinson!" Make your kids watch the 1960 Disney film first and then introduce the 60s TV series, the 1998 feature film version, or the newest 2018 TV series version (although the 1998 film is not particularly good, the new series is getting high marks).

Whether you're an adult looking for interesting ways to spend your time at home or a parent trying to craft educational but fun activities for kids, an exploration of Robinson Crusoe's literary and cinematic legacy is a timely choice. The original story is a good place to start if you have the patience for 18th century literature - it's a good read and a true classic with enormous influence. Otherwise try jumping in with any of the films and TV series listed here.

Posted by Jennifer Garlen at 11:26 AM