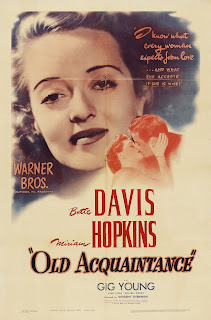 Old Acquaintance (1943) is primarily famous today for a scene in which Bette Davis violently shakes her off screen nemesis Miriam Hopkins and then offers a very insincere "sorry" to her victim, but if you watch the entire film you'll be completely on Bette's side about Miriam needing to be shaken. Directed by Vincent Sherman, this romantic melodrama stars the two feuding actresses as lifelong friends who weather ups and downs and disappointment together, but Miriam's character is just about the worst, most annoying frenemy a woman could imagine, leaving the viewer to praise Bette's heroine for just shaking her instead of opening up on her like Leslie Crosbie at the beginning of The Letter (1940). The picture is a compelling depiction of life with an emotional vampire, with a great performance from Davis and very solid support from John Loder, Gig Young, and Delores Moran, but Miriam Hopkins is the one you'll love to hate for her role as selfish, shallow, envious Millie Drake.

Davis plays up and coming novelist Kit Marlowe, who returns to her hometown at the beginning of the film and is reunited with her childhood friend, Millie (Miriam Hopkins). Jealous of Kit's success, Millie then becomes a writer of pulpy romances and enjoys immense wealth but still envies Kit's critical praise. As the years pass, Millie makes her husband, Preston (John Loder), miserable, and he yearns for a second chance at happiness with Kit, who also acts as a substitute mother for Millie's daughter, Deirdre (Dolores Moran). Kit is torn between her loyalty to Millie and her love for Preston, and her decision has lasting consequences for everyone involved.

Although she could play the diva as well as anyone, Davis is the straight arrow here, modest, loyal, practical, and self-sacrificing. Kit embodies the writer as a quiet intellectual, determined to make great art even if it only brings modest success. Millie, on the other hand, craves the limelight and the show of wealth; she churns out frothy popular romances like sausages, as one journalist (played by Anne Revere) accurately but too candidly observes. The public eats up Millie's romances, but Millie never outgrows her persistent jealousy of Kit. Hopkins chews the scenery with her tantrums and hysterics while everyone else has to react to them and attempt to placate Millie, who manages to make other people apologize for her bad behavior. The film wants us to accept that this friendship is important enough for Davis' Kit to make huge sacrifices to maintain, but modern audiences might be too keenly aware of the danger signs of unhealthy relationships to think either Kit or Preston should put up with Millie's emotional blackmail and constant theatrics.

Like numerous other romantic melodramas of this era, Old Acquaintance takes place over several decades and offers us scenes from different key points in the characters' lives. I admit to being a sucker for this kind of story because I love to see the ways in which the costumes, makeup, and lighting try to make young girls out of grown women and then continue on to show them as they grow old. Davis moves from a college girl's suit and energy at the opening to a matronly World War II uniform and a prominent gray streak in her hair near the end, while Hopkins' Millie never gives up her preference for showy, floating confections no matter how old she gets. The decades offer us an opportunity to contemplate what changes and what remains constant in the characters' lives, and for the two leads the passage of time is more distinctly emphasized by the growth of baby Deirdre into a young woman with romantic aspirations and frustrations of her own. Kit in particular is forced to think about herself in contrast with Deirdre when she finds out that Deirdre is in love with Kit's much younger boyfriend, Rudd (Gig Young). The situation puts Kit on the spot once again as she has to choose whether to fight for her own happiness or prioritize her loyalty to another woman.

If you enjoy the pairing of the two rivals, be sure to watch The Old Maid (1939), which also stars Davis and Hopkins as women tied together by jealousy and love. For more decades spanning stories with Bette Davis, see Mr. Skeffington (1944) and Payment on Demand (1951). Miriam Hopkins also stars in The Smiling Lieutenant (1931), Trouble in Paradise (1932), and Becky Sharp (1935), the last of which earned her an Oscar nomination for Best Actress.

See also: In Praise of Women's Pictures
Posted by Jennifer Garlen at 4:23 PM