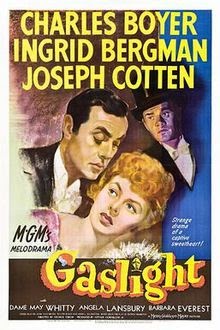 Gothic thrills get a stylish Hollywood makeover in George Cukor’s 1944 version of Gaslight, which earned Ingrid Bergman a Best Actress Oscar as a naive bride whose duplicitous husband tries to drive her insane. The top-notch cast also includes Charles Boyer, Joseph Cotten, and Dame May Whitty, but the best is a scene-stealing screen debut by a teenaged Angela Lansbury, who picked up an Oscar nomination for her performance, as well. Mounting suspense and thrilling cinematography make this tale of psychological terror a true classic, which rewards repeat viewings with its carefully developed motifs and keen attention to detail.

Ingrid Bergman stars as Paula Alquist, whose famous aunt is strangled by an intruder when Paula is just a young girl. Ten years later, Paula returns to the home she and her aunt once shared with her new husband, Gregory (Charles Boyer), but the honeymoon is short-lived, as Gregory soon turns cool and insists that Paula is losing her mind. As the evidence against her sanity mounts, Paula doubts her own senses, even though she sees and hears mysterious things every night when her husband leaves the house. Only Brian Cameron (Joseph Cotten), a handsome Scotland Yard detective, suspects the truth about Gregory’s motives for having his wife committed to an asylum.

The plot has a Bluebeard’s wife quality that is suggested early on by Paula’s encounter with Miss Thwaites (Dame May Whitty), a murder mystery fan who promptly tells Paula a gory story about a man who killed his wives. This is the dark side of fairy tale romance; after a whirlwind courtship, Paula’s dream becomes a nightmare, and her prince turns out to be an ogre. Bergman unravels beautifully over the course of Paula’s travails; her innocent, happy energy gives way to nervousness and doubt, then hysteria, as she comes unglued under Gregory’s baleful influence. Charles Boyer, sadistic and urbane, makes a perfect villain; he doesn’t have to smile for us to know how much he enjoys his insidious mind games. Gregory works on Paula’s mind with subtle, calculated cruelty, moving objects and undermining her confidence but also building her up with brief moments of happiness just to bring her crashing down. The audience understands his motives long before Paula even suspects, but the dramatic irony only enhances our suspense. We know it’s just a matter of time before Paula cracks under Gregory’s constant pressure.

Everyone in the cast is excellent, and Charles Boyer even got a Best Actor nod for his performance, but it’s impossible not to watch Angela Lansbury with particular fascination. Only nineteen at the time of her first film role, Lansbury commands the screen as Nancy, the pert housemaid whose presence unnerves the self-conscious Paula. With a tilt of her chin and a lazy stare, Lansbury makes Nancy insufferably vulgar and vain. She boldly propositions her master and subverts her mistress at every turn, but we can’t wait to see her again. Like the constables and even Gregory himself, we’re drawn to her undeniable charisma, no matter how forward and presumptuous she becomes. Nancy’s insubordinate behavior is yet another tool that Gregory employs to his advantage; he knows that she’s the worst possible choice of a maid to serve his wife, and that’s exactly why he hires her. Lansbury, all insolence and innuendo, would have carried off the whole picture had the leads been even a hair less skillful in their own performances.