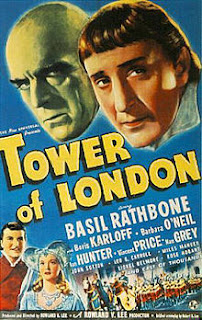 Tower of London (1939) lacks the poetic grandeur of Shakespeare's Richard III, but the story remains more or less the same, with an atmosphere of horror injected into the historical drama through the appearance of genre icons like Boris Karloff and Vincent Price. As history goes, this is bloody stuff, indeed; it opens with a beheading and goes on as it begins, and there's certainly enough death and torture to satisfy the bloodthirstiest horror fan. Basil Rathbone brings gravitas and intelligence to the role of Richard, while Karloff plays the executioner henchman who helps him murder his way to the throne. A fine supporting cast includes Ian Hunter, Barbara O'Neil, John Sutton, and the lovely Nan Grey, but most fans will flock to this film for the irresistible trio of Rathbone, Karloff, and Price.

As Richard, Duke of Gloucester, Rathbone schemes and slays in a bid for the English crown. To get there, he must first get rid of everyone ahead of him in line, including his brothers, King Edward IV (Ian Hunter) and the Duke of Clarence (Vincent Price), and his young nephews, the king's sons with long-suffering Queen Elyzabeth (Barbara O'Neil). Assisting Richard is Mord (Boris Karloff), a torturer and executioner whose own deformed foot creates a kinship with the hunchbacked Duke. While Richard murders his way to power, the Queen's followers, John Wyatt (John Sutton) and Lady Alice (Nan Grey), struggle to keep their love alive and to defend the country from Richard's evil reign.

As the subject matter implies, this is really Rathbone's film, and he gives a terrific performance, even if he doesn't get to spout any Shakespearean soliloquies. His Richard is not merely evil and repulsive; he has courage, genius, and the military prowess to match his ambition. His strange relationship with Anne Neville (Rose Hobart) proves that he has a certain charisma, too, like a snake that charms before striking. The discovery of the real Richard III's body in 2012 made him a celebrity again and shed new light on the historical record, but in many ways Rathbone's performance seems ahead of its time, especially in comparison with the way the king is portrayed in Shakespeare's play. Rathbone also gets to exercise his celebrated swordsmanship in several sparring scenes, which again emphasize the active, aggressive nature of this incarnation of his character.

The rest of the performers help to make Tower of London a very solid example of its type. John Sutton is something of a stand-in swashbuckler as John Wyatt, one of Richard's most determined opponents, and Nan Grey has several good scenes as his lady love, though her best is probably her rescue mission to help John escape from Richard's dungeon. Barbara O'Neil radiates maternal devotion and fear as the mother of the doomed little princes, while Ian Hunter makes a hale but too trusting Edward IV. Karloff, of course, owns his scenes as Mord; he and Rathbone pair up perfectly and convey a lot about their relationship through their expressions and body language. Mord yearns to see combat on the battlefield, and he mostly enjoys his murderous occupation, but the scene in which he is sent to murder the young princes adds just a touch of humanity to his villainous soul. Vincent Price, still at the start of his career in 1939, has a fairly small part as the weak-minded Clarence, but he makes the most of it, especially in his fateful drinking contest with Richard. The role presages those he would play later in life, especially in the Corman pictures and the AIP horror of the 70s.

Rowland V. Lee, who directed Tower of London, made a number of historical action pictures late in his career, including The Count of Monte Cristo (1934), The Three Musketeers (1935), and Captain Kidd (1945), but he also directed Karloff and Rathbone in the excellent Son of Frankenstein (1939). For more of Rathbone's great villains, see The Adventures of Robin Hood (1938) and The Mark of Zorro (1940). Karloff is justly famous for his monsters and fiends; to get beyond his Universal classics from the 30s, try Val Lewton horrors like The Body Snatcher (1945) and Bedlam (1946), or catch him in a more sympathetic mood in Corridors of Blood (1958). Fans will recognize Barbara O'Neil as Scarlett's mother in Gone with the Wind (1939), while John Sutton and Nan Gray can both be found with Vincent Price in The Invisible Man Returns (1940). For a double feature starring the trio of Rathbone, Karloff, and Price, follow up Tower of London with the delightfully macabre The Comedy of Terrors (1963), which also stars Peter Lorre.

Posted by Jennifer Garlen at 1:20 PM