I Feel It in My Bones: My Favorite Star Trek Character 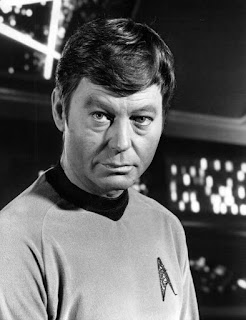 With Star Trek Beyond out in theaters just in time for the 50th anniversary of the original show, I find myself thinking back about my lifetime of Trek experiences. I first saw the show as a little girl, when it was on in re-runs during the 1970s. I have been a fan ever since, seeing every movie and every new television series (although Enterprise never quite captured my attention like everything else). There's a lot to love about Treks old and new, from the progressive vision of humanity's future to the deep love of literature that balances its more obvious focus on science and engineering. Every fan, of course, has his or her favorite episode, movie, and character, and for me that character has always been the irascible Dr. Leonard McCoy, particularly as played by original series star, DeForest Kelley.

I've had some trouble adjusting to the new McCoy, played by Karl Urban, but mainly because my devotion to the original ran so deep. Urban finally won me over with his performance in Star Trek Beyond, thanks largely to his wonderful banter with Zachary Quinto's pitch-perfect Spock. Still, Kelley will always be the "real" McCoy as far as I'm concerned. His depiction of a future Southerner struck home for me as a little girl growing up in the Deep South; he was one of the only truly positive representations of Southern people I had seen. Usually Southerners were hicks on television; The Dukes of Hazzard was the worst offender, but even The Andy Griffith Show had a folksy, aw-shucks sensibility that galled me. I was a voracious reader, a bookish kid who loathed sports, but I was also defined by a distinctive drawl and a childhood spent on a farm. I never saw anybody like me on TV.

Something about Bones, though, spoke to me. He was cranky but humane, the voice of the heart to balance Spock's voice of the head. He didn't relish adventure and being transported across space, but you could rely on him in a pinch. He never gave up his drawl or his Southern manner, but he worked on an integrated starship where everyone was judged by his or her individual merits. He knew Shakespeare just as well as Kirk and Spock. He was instantly familiar but so different from any Southern TV character I had seen before. Most of all, his Southern identity felt authentic, and that's because it was. DeForest Kelley was born in Georgia, where he lived until he left for California to become an actor. His accent wasn't forced or feigned; it sounded like the people I grew up with and knew. I've talked about Southern identity in classic films and television before; it's rare to see an actual Southerner play a positively depicted Southern character. It means a lot to young people in particular to see someone like them get to be smart, forward-thinking, and part of the in-crowd of heroes and pioneers.

Bones was a doctor, damn it, as he often liked to say, but to me he's still the heart of Trek. I'm pleased to see the character continue in the new series, even if I'll always hold a special place in my heart for Kelley's original version. Do you have a favorite Star Trek actor or character? I'd love to hear about it in the comments section!
Posted by Jennifer Garlen at 11:41 AM