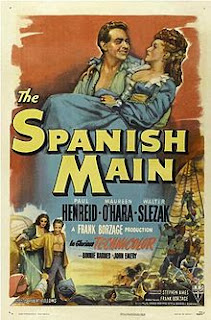 The Spanish Main (1945) revisits many of the same elements as earlier swashbucklers, especially Captain Blood (1935) and The Black Swan (1942), but this time instead of Errol Flynn or Tyrone Power we get Paul Henreid as the heroic pirate, and the actor gives a perfectly winning performance in the role. The picture suffers a bit in comparison with the greatest examples of the genre, and it certainly doesn't break any new ground, but Henreid and leading lady Maureen O'Hara make The Spanish Main an entertaining way to spend an evening. Gorgeous Technicolor costumes and supporting performances from Walter Slezak, Mike Mazurki, and the very engaging Binnie Barnes also add to the appeal.

Henreid plays Laurent Van Horn, a Dutch captain whose ship of immigrants to the Carolinas wrecks off the coast of Cartagena. Van Horn and his passengers become the prisoners of the foppish, corrupt viceroy, Don Juan Alvarado (Walter Slezak), but Van Horn escapes from the dungeons and reinvents himself as the notorious pirate known as The Barracuda. With his crew of former prisoners, Van Horn exacts revenge on Alvarado at every opportunity, but the best chance of all comes when the pirates take the ship carrying Alvarado's intended bride, the beautiful Francesca (Maureen O'Hara). Van Horn promptly marries Francesca to gall Alvarado, but his actions anger his pirate peers, especially the jealous Anne Bonney (Binnie Barnes) and his second-in-command, Mario (John Emery). With plots rising against him at every turn, Van Horn finds that he might actually be in love with his stolen bride.

Paul Henreid is, of course, best remembered for Casablanca (1942); in The Spanish Main he gets to play a more physical, roguish role, but his refined air softens his character in comparison with Tyrone Power's protagonist in The Black Swan. The juxtaposition of the two comes naturally because both actors play pirates engaged in a war of the sexes with Maureen O'Hara, who was classic Hollywood's go-to girl for gorgeous shrews. Henreid has an air of continental class, even when he's tied to the mast and being lashed, that makes us doubt the sincerity of Van Horn's misogynist threats, but the actor looks remarkably good in the period costumes, especially with his tousled blond curls. This is a sexier, looser Henreid, who looks like he's having a lot of fun. He's exciting to watch in the sword fight sequences, too, and the audience can certainly sympathize when Francesca falls for him. O'Hara is radiantly lovely in a series of dazzling gowns, but as usual her fiery spirit serves as her chief attraction, and she has some wonderful scenes in which her character gets to prove her mettle to Van Horn, even standing to a pistol duel and organizing the pirates' escape from Alvarado's treacherous clutches.

If the miniature ships and painted backdrops look a little obvious to modern eyes, the performances of the supporting players also help to make up for it, particularly Binnie Barnes in a delightful turn as the real lady pirate Anne Bonney. She's so feisty and fun that she could have carried her own movie, although the resolution for her character is one of the places where the picture falls flat. Walter Slezak makes for a preening, pompous villain as Alvarado; he would play a very similar role in The Pirate (1948), and in both pictures he's a perfect foil for the vigorous, virile hero. John Emery rocks his roguish hair and mustache as the slippery Mario, although he doesn't really have a lot to do until the last third of the picture, while Mike Mazurki proves the standout of the minor characters without ever uttering a word. Fritz Leiber, who had also appeared in The Sea Hawk, plays yet another priest character, and naturally he looks very much at home in the role, although he disappears toward the end of the movie as the action heats up.

Frank Borzage, a two-time winner of the Oscar for Best Director, made The Spanish Main toward the end of his career, which had started out during the silent era. He is probably best remembered today for A Farewell to Arms (1932) and the wartime morale booster, Stage Door Canteen (1943). For more of Paul Henreid, see Now, Voyager (1942), Deception (1946), and Rope of Sand (1949); he returned to piracy in Last of the Buccaneers (1950) and Pirates of Tripoli (1955). Maureen O'Hara plays more beautiful firebrands in The Quiet Man (1952) and McClintock! (1963), opposite frequent costar John Wayne, but for something different see her in Dance, Girl, Dance (1940). Catch Binnie Barnes in The Private Life of King Henry VIII (1933), The Last of the Mohicans (1936), and In Old California (1942). If you really want to loathe a Walter Slezak villain, see him at his worst in Lifeboat (1944).

Posted by Jennifer Garlen at 8:06 PM