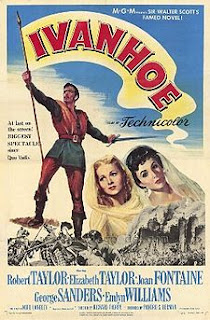 Adapted from the novel by Sir Walter Scott, Ivanhoe (1952) makes a perfect companion to The Adventures of Robin Hood (1938). Both are rousing Technicolor adventures set during the days of King Richard the Lionheart, and Robin even plays a critical part in the later story. Robert Taylor might lack the insouciance of Errol Flynn's roguish Robin, but his Saxon knight is a bold hero, nonetheless, and Joan Fontaine matches her sister, Olivia de Havilland, as an alluring lady love. Director Richard Thorpe oversees the lavish production, which earned three Oscar nominations, and the film benefits from memorable performances by Elizabeth Taylor, George Sanders, and Finlay Currie.

Robert Taylor leads the cast as the heroic knight, who returns from the Crusades determined to free King Richard from imprisonment and restore him to his throne. Rejected by his Saxon father, Cedric (Finlay Currie), for his loyalty to the Norman king, Ivanhoe must contend with the treachery of Prince John and his supporters, especially the knights Sir Hugh De Bracy (Robert Douglas) and De Bois-Guilbert (George Sanders). Ivanhoe's adventures introduce him to the beautiful young Jewess, Rebecca (Elizabeth Taylor), who falls in love with him in spite of his long-standing romance with Rowena (Joan Fontaine). All of Ivanhoe's friends, however, are threatened by the schemes of Prince John's allies, who hope to ensure that King Richard never returns to England alive.

Location shooting heightens the atmosphere and appeal of the picture, especially in the climactic sequence at Torquilstone Castle, where Ivanhoe and his companions are held prisoner by the Norman knights. Luckily for Ivanhoe, Robin Hood leads an army of Saxon men to lay siege to the castle, although in this film Robin is called only by the less familiar name of Locksley (played by Harold Warrender). The tournament scenes are also highlights; they exude pomp and excitement but also provide opportunities for each of the key characters to reveal themselves. Ivanhoe's first tournament, where he fights in disguise as the black knight, sets the stage for later conflicts between the Saxon hero and his Norman nemesis, De Bois-Guilbert, while their final battle brings their long rivalry to its destined end. The pageantry, shot in gorgeous Technicolor, rivals that of The Adventures of Robin Hood, although the mood of the later picture is more somber.

Taylor makes for a serious and mature Ivanhoe, but his performance sells the hero's commitment to his cause. The movie downplays the love triangle between him and the two women; Taylor and Fontaine are too well matched for any real doubt that Ivanhoe will stay with Rowena, but Elizabeth Taylor is so compelling as Rebecca that she makes us wish the story could end differently. She handles her scenes with emotion and skill, especially those that address the plight of Jews in Medieval England, and Felix Aylmer is also very good as her father, Isaac. Finlay Currie provides a different model of paternity as the stubborn Cedric, and he threatens to steal his scenes with his blustering resentment and underlying affection. George Sanders, an adept at playing the heavy, adds humanity to De Bois-Guilbert with the sincerity of his passion for Rebecca, but he's most in his element as the haughty foe. The rest of the Norman knights run together, particularly when they're dressed for battle, although Guy Rolfe makes the best of his few scenes as the despicable Prince John. Be sure to appreciate Welsh actor Emlyn Williams as Womba, the lowly serf whom Ivanhoe promotes as his squire; it's a shame that he disappears without much fanfare before the picture ends.

Ivanhoe picked up Oscar nominations for Best Picture as well as cinematography and score, but it had to compete with the likes of High Noon (1952), The Quiet Man (1952), and The Greatest Show on Earth (1952). Director Richard Thorpe returned to the same territory the following year with Knights of the Round Table (1953), in which Robert Taylor plays Lancelot and Felix Aylmer turns up again as Merlin. For more from Thorpe and Taylor, try All the Brothers Were Valiant (1953) and The House of the Seven Hawks (1959). See Joan Fontaine and George Sanders in Rebecca (1940), and don't miss Finlay Currie in Great Expectations (1946) and People Will Talk (1951). If you want to catch Fontaine and Elizabeth Taylor in different roles, see them both in Jane Eyre (1943), in which Fontaine plays the lead and Taylor appears in an important but uncredited role as Jane's friend, Helen Burns.
Posted by Jennifer Garlen at 9:09 PM