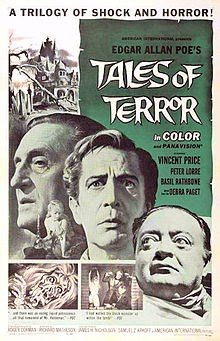 Most of Roger Corman's Poe movies stretch the author's short stories into feature length plots, but in Tales of Terror (1962) the director opts for an anthology approach, presenting a handful of tales in three distinct segments. Vincent Price, naturally, stars in all three, but his costars change with each story; Peter Lorre and Basil Rathbone make particularly memorable appearances, along with leading ladies Debra Paget, Leona Gage, Maggie Pierce, and Joyce Jameson. The segments vary in tone and quality, but overall Tales of Terror offers a good time for fans of Corman's unique take on the horror genre, and those who admire Vincent Price get the special pleasure of seeing him play three very different Poe characters in rapid succession.

The anthology opens with "Morella," in which Price plays a lonely widower haunted by the premature death of his beautiful wife (Leona Gage). The return of his dying daughter (Maggie Pierce) stirs him to long repressed emotion, but her presence also awakens the malevolent spirit of Morella. In "The Black Cat," Peter Lorre stars as the drunken Montresor, whom Price antagonizes in the guise of the wine critic Fortunato. When Fortunato has an affair with Montresor's wife (Joyce Jameson), Montresor decides to murder both of them, but his wife's pet cat thwarts his attempts to hide the crime. Price returns as the title character in the final segment, "The Case of M. Valdemar," in which Basil Rathbone plays a sinister mesmerist who seeks to control a dead man's will.

"Morella," the weakest of the three acts, makes for an awkward start to the collection, since it is neither seriously uncanny nor amusingly campy. Morella's grudge against her husband and daughter is never entirely clear, although the final conflagration does present an interesting spectacle. Both of the other segments, though wildly different from one another, succeed better and reward the viewer's perseverance. "The Black Cat" combines the plot of Poe's original version with that of "The Cask of Amontillado," twisting both tales into a single narrative that exploits its stars' talent for pitch black comedy. Lorre's Montresor is a drunkard and a buffoon, while Price's character is a supercilious fop, but both excel at this kind of work, and Lorre milks the part for every bit of dry, dark humor. The last story breaks in the other direction, toward the truly horrific, with Valdemar's soul held hostage in his corpse by the diabolical Carmichael. Basil Rathbone gives a chilling performance, especially toward the end, when Carmichael uses his power over the dead man to claim Valdemar's widow and fortune for himself.

Aside from Poe, whose work Corman always adapts very loosely, Vincent Price serves as the unifying element for the three vignettes, and his different roles give viewers a chance to survey his varying approaches to horror. He plays it straight in both "Morella" and "The Case of M. Valdemar," first as the haunted victim of horrors and then as the monstrous being who haunts others. In "Morella" he also displays signs of nervous decay, and Price is always reliable as a character who is rapidly coming unglued. His Valdemar does not become a ghoul willingly, but Price makes for a very unnerving animated corpse, and his climactic scene might be one of the scariest bits of the actor's career. In "The Black Cat" he indulges in the gallows humor for which he is well remembered by cult horror-comedy fans, romping through gruesome gags and hamming it up enthusiastically, especially during the wine tasting contest. Lorre makes an excellent partner in crime for this sort of macabre merriment; his short, rotund figure and dour expressions contrast Price's elegant height and overly refined manner perfectly. Price gets to work through all of these modes at greater length in the other Corman productions and in his later work during the 1970s, but the anthology of shorts provides a chance to compare and contrast his methods in each segment. Even when the material is not as good as it might be, as in the case of "Morella," Price gives it his best, and he's always fun to watch.

To see Price, Lorre, and Rathbone together again, move on to The Comedy of Terrors (1963), which also features Joyce Jameson and Boris Karloff. Corman reunites Lorre and Price for The Raven (1963), as well, and you can catch Price and Rathbone together in the much earlier Tower of London (1939). For a survey of Price's roles in other Corman Poe pictures, see House of Usher (1960), The Pit and the Pendulum (1961), and The Tomb of Ligeia (1964). Twice Told Tales (1963) offers a similar anthology of stories, this time from the works of Nathaniel Hawthorne, with Price again starring in every segment. Basil Rathbone is best remembered for playing Sherlock Holmes, but if you like the idea of him as a horror star, check out The Son of Frankenstein (1939), The Black Cat (1941), and The Black Sleep (1956).
Posted by Jennifer Garlen at 9:33 PM