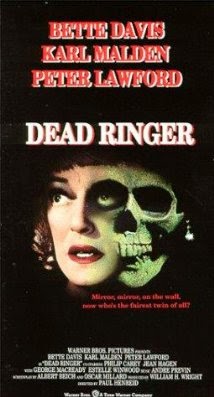 Despite its gruesome title, Dead Ringer (1964) provides a sharp contrast to the better known hagsploitation movies Bette Davis made during the same period. In both Whatever Happened to Baby Jane? (1962) and Hush... Hush, Sweet Charlotte (1964), Davis plays aging women well beyond the verge of a nervous breakdown, but in Dead Ringer the actress returns to more glamorous territory as a wealthy widow and the vengeful twin who assumes her identity. Between the two characters, Davis plays callous, resentful, homicidal, and deceptive, but neither Margaret nor Edith ever comes across as crazy. Paul Henreid, one of Davis' most important leading men from the old days, directs the action with an eye for its melodramatic sensibilities more than its thrills, while Davis' costars Karl Malden and Peter Lawford also emphasize the romantic angles as each of the twins' love interests. Thriller fans looking for high tension might find Dead Ringer a bit of a letdown, but Davis admirers will get twice the gratification from this story of thwarted love and deeply ironic justice.

Davis opens the film as Edith Phillips, a middle-aged spinster with a failing Los Angeles cocktail bar and a cop boyfriend, Jim (Karl Malden). When Edith attends the funeral of her brother-in-law, the lover her sister, Margaret, stole from her years ago, the twin sisters meet again for the first time in nearly two decades. Angry about the old betrayal and desperate to escape her bleak life, Edith murders Margaret, stages the body as her own suicide, and takes the rich sister's place in a lavish mansion. Unfortunately for Edith, Jim proves more dedicated to her memory than she expects, while Margaret's lover, Tony (Peter Lawford), has dangerous secrets of his own to protect.

We actually see very little of the real Margaret in the movie; a double stands in for Davis, conveniently wearing a mourning veil, in most of the early scenes, and Edith kills Margaret in the first act. When we do see both sisters in the same frame, the effects work looks convincing, and Davis does an excellent job acting opposite herself. She had played twins before, in the 1946 film, A Stolen Life, so she had experience with the trick of seeming to be two different people in the same shot, although the older film actually employs the technique more frequently and to more startling effect. Davis spends most of Dead Ringer playing Edith pretending to be Margaret, a challenging task made more difficult by the constant presence of servants, family members, friends, and, worst of all, Margaret's suspicious lover. Not having seen her sister in so many years, Edith naturally has no idea who Margaret's friends are or how to behave around them, and her suddenly cooled ardor toward Tony quickly tips him off that a changeling has taken Margaret's place. In the third act, however, Davis has some truly triumphant moments as Edith finally realizes the extent of Margaret's crimes and makes a fateful decision to protect the integrity of her old identity from the person she has become. There the picture plunges into the melodramatic territory that Davis knows so well, and her final moments as the bravely masquerading "Margaret" are quite as good as any of the climactic scenes she played in her younger days.

A strong supporting cast helps to elevate the material, as well, particularly Karl Malden as Edith's rather prosaic beau. Edith doesn't understand how much Jim cares about her until she has already gone too far to reclaim him, and Malden is especially good in the later acts, when Jim doggedly hangs around the DeLorca mansion because "Margaret" reminds him so much of Edith. Malden doesn't play Jim as a dope, but he has to be thick enough not to see through Edith's disguise. Peter Lawford, on the other hand, is every bit the wolf; his Tony is as sharp-eyed and callous and Jim is gullible and sentimental. Fifteen years younger than Davis, Lawford has the air of a gigolo, handsome but opportunistic and calculating. Since Margaret is only in the movie for the first act, Tony becomes the real villain of the piece, and he's marvelously awful, so much so that the viewer will cheer his much-deserved doom. Jean Hagen has a small role as Margaret's socialite friend, Dede, and Paul Henreid's daughter, Monika, plays Margaret's maid, but Estelle Winwood is the most memorable of the bit players as the elderly Dona Anna.

Posted by Jennifer Garlen at 1:49 PM