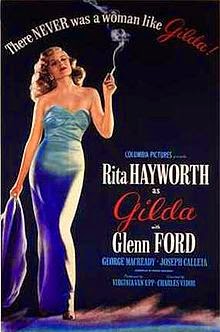 Gilda (1946) would prove both the high point of Rita Hayworth's career and the bane of her personal life, since it created an enduring image of the actress as sex symbol, temptress, and femme fatale. Hayworth would later lament, "Every man I knew went to bed with Gilda... and woke up with me." Even in her own lifetime, the fictional character outshone the person, who had started out as a dancer named Margarita Cansino. Hayworth certainly provides the fuel that sets Charles Vidor's noir film on fire; she's impossibly alluring from the first moment we see her, flipping that fabulous hair to reveal a perfect face and eyes lit up with mischief. Gilda's dazzling sexuality helps to make up for a frankly bewildering plot, but it also acts as cover for the movie's more daring depiction of the passionate attraction between its two male protagonists, played with smoldering intensity by Glenn Ford and George Macready.

Ford turns up first as Johnny Farrell, a drifter who blows into Buenos Aires and strikes up a strangely intense friendship with urbane casino owner Ballin Mundson (George Macready). They make a happy pair until Mundson brings Gilda (Hayworth) home as his wife. Johnny and Gilda have a past together, but Johnny dedicates himself to watching Gilda for Mundson's benefit, even though she seems determined to throw herself at every man in town. When Mundson's illicit business affairs end in his apparent death, Johnny takes his loyalty to extremes by marrying Gilda as a way to ensure her fidelity to the dead man.

The business end of the plot, which involves Germans, the tungsten market, and a mysterious pile of patents, merely muddies the narrative and gives Mundson a reason to act shifty and then disappear. Gilda never pays any attention to it, Johnny never understands it, and the viewer might as well ignore it, too. Mostly it makes Mundson a more sinister figure by giving him Nazi associations, but he already looks the part with his blond hair, refined features, and long facial scar. All of the really interesting scenes focus on the bizarre love triangle between the three leads; Johnny's eyes burn with a kind of crazed devotion to Mundson even as they ignite with equal hatred for the faithless Gilda. "Hate can be a very exciting emotion," Mundson observes, and that confusion of love and hate drives the picture. Johnny loves Mundson and hates Gilda, especially when Mundson gives Gilda the place that Johnny wishes to occupy himself, even though neither man would ever admit to the true nature of their mutual attraction. Gilda hates Johnny and punishes him through her marriage to Mundson; she hurts him more by pretending to cuckold the man Johnny loves. Mundson might not really love anyone except himself, but he certainly has strong feelings of some kind about both Johnny and Gilda, especially when he returns to find them married to each other and living off of his money.

Through it all, Hayworth is resplendent, a gorgeous bundle of utterly irrational femininity. Gilda's actions never make much sense except in her own mind, but the film doesn't present her as an intellect, merely an id. Mundson accurately describes her as "a beautiful, greedy child," although he doesn't add that she is the kind of child who would gleefully pull the wings off of flies. It's a sexist characterization, to be sure, but the film works because the camera loves Hayworth just as devotedly as Johnny loves Mundson. She blazes like a fiery idol; even her dubbed song numbers have a jaw-dropping effect, especially the famous "Put the Blame on Mame" segment, which ends with her threatening to strip in front of an eagerly leering audience. Her shocking behavior is all part of her scheme to hurt Johnny, but she really drives each nail in, delivering an endless stream of barbed lines. "If I'd been a ranch," she says, "they would have named me the bar nothing." The worse Gilda behaves, the more we adore her; even Johnny can't resist her electric appeal, though he might be the last person to figure that out. It's little wonder that the role became the signature moment of Hayworth's career; after all these years it's still so easy to fall under Gilda's provocative spell.


Posted by Jennifer Garlen at 3:43 PM