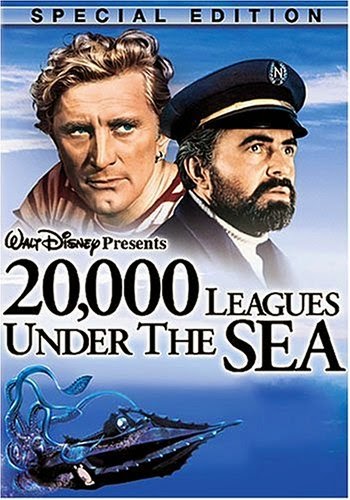 Adapted from the novel by Jules Verne, Disney’s large scale Technicolor adventure provides plenty of eye-popping aquatic scenery, which helped it win a pair of Oscars for Special Effects and Best Art Direction. 20,000 Leagues Under the Sea (1954) also offers classic film fans a unique combination of iconic stars, including James Mason as the enigmatic Captain Nemo, Kirk Douglas as a feisty sailor, and Peter Lorre as a scientist’s nervous assistant. While its pace might seem a bit slow by modern standards, especially for younger children, the effects and actors make the picture well worth the two hours it takes to watch, and 20,000 Leagues Under the Sea remains one of the best and most influential of Disney’s live action features.

Paul Lukas plays Professor Pierre Aronnax, who embarks on a ship with his assistant, Conseil (Peter Lorre), to investigate rumors of an enormous sea monster that is destroying vessels at sea. When the supposed monster attacks their ship, Aronnax, Conseil, and sailor Ned Land (Kirk Douglas) are thrown overboard, where they discover that the creature is, in fact, a technologically advanced submarine controlled by the misanthropic Captain Nemo (James Mason). Nemo reveals to the men a world of oceanic wonders, but his destructive methods cause them to question his sanity and look for opportunities to escape.

Lukas and Mason are the intellectual, dramatic leads as the idealistic scientist and his grimly jaded host. They represent different perspectives on science and the nature of man, and their debates hinge on philosophical, scientific, and academic principles. While Mason in particular gives a memorably brooding performance, the film does tend to slow down when Nemo and Aronnax hold the screen. Livelier scenes focus on Ned Land and the perpetually woeful Conseil, both of whom have far more pragmatic attitudes about their situation. Lorre plays comic relief with the same deadpan genius that characterizes many of his late career performances. Kirk Douglas’ Ned might be a greedy, impulsive fool, but he’s still the most energetic and charismatic character in the movie, especially when he’s singing “A Whale of a Tale” or goofing around with Nemo’s pet sea lion.

The submarine takes both the characters and the audience on an amazing adventure, with elaborate underwater scenes of divers mourning a fallen comrade and harvesting the bounty of the sea. Peril abounds, as Nemo first attempts to drown his three visitors and then involves them in dangerous expeditions, including an obligatory island encounter with cannibals. The giant squid fight sequence holds up well, even after sixty years, and the Nautilus is a fantastic early example of steampunk design, simultaneously elegant and menacing. These elements would have a lasting effect on the American cultural consciousness, especially with the ride at Walt Disney World recreating the experience for generations of fans from 1971 until 1994. Luckily, the film has outlasted the attraction it inspired.