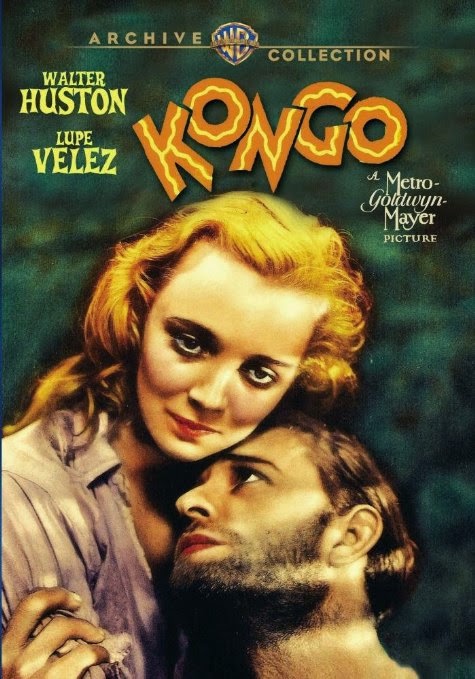 Kongo (1932) certainly ranks as one of the stranger productions of the Pre-Code era and also one of the most alarmingly perverse. It began as a stage play and had already been adapted by Tod Browning in 1928 as West of Zanzibar, with the great Lon Chaney and Lionel Barrymore as the embittered rivals, but the MGM sound version benefits from the experience of Walter Huston, the actor who had originated the role of Dead Legs Flint on the stage. Huston might not be remembered as a man of a thousand faces, but he makes quite a grotesque spectacle as the picture’s insanely vengeful villain, who could give Joseph Conrad’s Kurtz a run for his money. Lurid, deliriously racist, and steeped in sadistic thrills, Kongo is a fascinating journey to the dark heart of classic horror for those with a strong enough stomach, but it’s by no means safe territory for the Pre-Code novice.

Huston’s Dead Legs Flint was paralyzed years ago when his rival, Gregg (C. Henry Gordon), crushed his spine and stole Flint’s wife. As part of his elaborate plan for revenge, Flint takes Gregg’s daughter, Ann (Virginia Bruce), as an infant and places her in a convent school until she is grown. Then he delivers her to a Zanzibar brothel for humiliating assault and abuse. After two years, he has her brought to his miniature empire in the Congo, where he rules the natives with a mixture of cheap magic and cruelty. When the drug-addicted young doctor, Kingsland (Conrad Nagel), stumbles into Flint’s camp, he rekindles Ann’s humanity, but he also attracts the interest of Flint’s nymphomaniac mistress, Tula (Lupe Velez). Flint wants Kingsland to operate on his damaged back, and he also has a final act of violent vengeance planned for Ann and Gregg.

Kongo shares many themes with Heart of Darkness, including a repulsively racist attitude toward the native Africans, but its focus is really on Flint’s maniacal obsession with revenge. He has an ugly, disfigured face to match his twisted soul, and he relishes the suffering he inflicts on Ann, treating her like a dog in his own house and encouraging her miserable dependence on alcohol. “How proud your father would be if he could see you,” he sneers. His sadistic streak extends to the natives and Tula, whose tongue he attempts to cut out when she disobeys his orders to keep Kingsland away from the addictive root he craves. Flint’s grand scheme requires his old enemy to come to the camp, confront Ann’s defilement, and then die so that Flint can have Ann burned alive in accordance with the local burial custom. After nearly twenty years of plotting, Flint seems poised to realize his horrible desire, but an ironic revelation casts a different light on everything he thought he knew.

Huston’s performance dominates the picture, but Virginia Bruce sells the fractured humanity of Ann very effectively. She really looks awful when we see her again after her ordeal in Zanzibar, with deep lines around her face and a wild, bestial quality in her movements. Conrad Nagel also revels in a sorry state as the drug-addled Kingsland, swinging between debauched euphoria and sober nobility. Bruce and Nagel have some very tender scenes in which they attempt to save one another from the nightmare world they inhabit, but their best moments as actors are their worst ones as characters. Once they get cleaned up they become more conventional and less memorable, but luckily their romantic salvation occurs very late in the picture. Lupe Velez plays the Portuguese Tula with more energy than subtlety; Tula’s chief ambition is to sleep with as many white men as possible, but her residence in the remote camp offers her limited opportunities, and it’s never really clear how the audience is supposed to feel about her.

Track down the 1928 film for a double feature comparison of the two versions. William Cowen only directed half a dozen movies, none of them particularly well-known today. Walter Huston, however, earned four Oscar nominations during his screen career and won Best Supporting Actor for The Treasure of the Sierra Madre (1948). For more of his work, see Dodsworth (1936), The Devil and Daniel Webster (1941), and Yankee Doodle Dandy (1942). Virginia Bruce also stars in Jane Eyre (1934), Born to Dance (1936), and The Invisible Woman (1940). Look for Conrad Nagel in The Divorcee (1930) and All That Heaven Allows (1955). Lupe Velez is best remembered for the Mexican Spitfire movies starting in 1940, but you can also see her in The Gaucho (1927) and Where East is East (1929).

Kongo is currently available for streaming on Warner Archive Instant; Warner has also released the film as part of its Archive DVD collection.
Posted by Jennifer Garlen at 9:05 AM