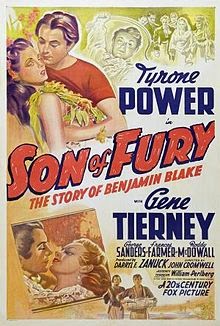 Tyrone Power and Gene Tierney give Son of Fury (1942) plenty of sex appeal to go along with its adventurous story of 18th-century greed and revenge, and the sight of those two in extended scenes of Polynesian undress justifies the movie’s existence all by itself. Luckily, Son of Fury has plenty of other attractions for classic movie fans, including a fantastic cast of supporting players and excellent direction from John Cromwell. While not exactly a swashbuckler, this film adaptation of the novel by Edison Marshall offers one memorable thrill after another, with Power fighting, swimming, dancing, and romancing his way from the streets of Bristol and London to the shores of the South Pacific.

Power plays Benjamin Blake, whose supposed illegitimacy keeps him from inheriting his dead father’s estate. Ben’s uncle, Sir Arthur (George Sanders), treats him like a servant and hopes to prevent him from ever establishing a claim to the family wealth, but Ben has supporters in his aunt (Kay Johnson) and his beautiful cousin, Isabel (Frances Farmer), with whom Ben falls in love. After an altercation with Sir Arthur, Ben goes on the run, eventually finding riches and romance on a tropical island, where Eve (Gene Tierney) becomes his lover. Ben, however, feels compelled to return to England, confront his uncle, and claim Isabel as his bride, even though London holds many dangers for him as a wanted man.

Power gives a great performance as the hot-headed Benjamin Blake, who nurses his simmering resentment against his uncle for years. “Flesh and blood can stand no more,” he declares after Sir Arthur punishes him for courting Isabel with a vicious whipping, although he suffers violence at other hands, as well. The intensity of the character suits the star perfectly, and he looks equally good in the English period costumes and the Polynesian loincloth. The island costume puts quite a bit of Power’s physique on display, especially when he goes diving for pearls, and his matinee idol look is matched by Tierney as the native beauty who playfully joins him in the water. Her ignorance of English and Western customs might be laid on a little thick, but Tierney is so stunning that it hardly matters what language her character speaks. We’re on her side the moment we first see her, hoping that Ben will forget all about England and the sophisticated but spoiled Isabel.

The supporting cast elevates the whole production to an almost delirious height, with Sanders especially notable as the smoothly heartless Sir Arthur. He and Power have a series of riveting fight scenes that bookend Ben’s Polynesian adventures, and Sanders of course has the cultured manner and physical presence to pull off the role. John Carradine gives one of his characteristically brilliant performances as Caleb, the sailor who befriends Ben and takes him along to the remote Pacific island, while Harry Davenport is genuinely moving as Ben’s beloved grandfather. Dudley Digges steals his scenes as Bartholomew Pratt, the London man of the world whom Ben employs against his uncle; Digges has an ideal face for an 18th-century character, and his first scene is a highlight of the film. Even Roddy McDowall makes a brief but critical appearance as young Ben, setting the stage for Power’s adult interpretation of the character. Tierney and Frances Farmer supply the picture’s female beauty, but Kay Johnson, who was married to John Cromwell at the time, is wonderful as Ben’s aunt Helena, and Elsa Lanchester takes over the movie for her one long scene as a sympathetic barmaid who helps Ben evade the law.

The only thing that might have improved Son of Fury is color, which would have brought the Pacific Island scenes a lusher look, but as a whole the movie works beautifully. See more of Power’s tremendous energy in The Mark of Zorro (1940), Blood and Sand (1941), and The Black Swan (1942). Gene Tierney also stars with Power in The Razor’s Edge (1946), but she is best remembered today for Heaven Can Wait (1943), Laura (1944), and Leave Her to Heaven (1945). George Sanders won an Oscar for Best Supporting Actor for All About Eve (1950), while John Carradine gained lasting fame for roles in Captains Courageous (1937), Stagecoach (1939), and The Grapes of Wrath (1940). For other films directed by John Cromwell, try Of Human Bondage (1934), The Prisoner of Zenda (1937), and The Enchanted Cottage (1945).
Posted by Jennifer Garlen at 7:55 PM