Classic Films in Focus: SHE WORE A YELLOW RIBBON (1949) 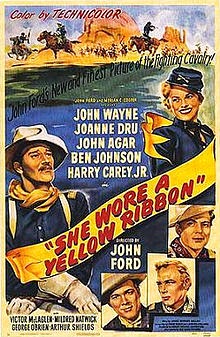 She Wore a Yellow Ribbon (1949) is the second act in John Ford’s trilogy of cavalry films, and it does indeed wave the patriotic frontier banner pretty fervently, but the title’s feminine pronoun also suggests the picture’s deep preoccupation with the familial and romantic aspects of cavalry life. With John Wayne cast in a distinctly paternal role, this narrative contemplates an older man’s relationship with his substitute children, both the younger officers under his command and a young woman who stands in for his own lost daughters. While the usual Western battles and chases, plus Ford’s beloved Monument Valley, provide the story with its excitement and grandeur, the domestic scenes form its sentimental heart. Wayne and Ford fans justly rank She Wore a Yellow Ribbon as a favorite, but fine performances from Victor McLaglen, Mildred Natwick, and Ben Johnson also help to cement the picture’s enduring appeal.

Wayne plays Captain Nathan Brittles, a career cavalry officer facing a plethora of problems in the days just before his retirement. A massive Indian uprising is destabilizing the entire territory, even as Brittles’ commanding officer (George O’Brien) saddles his patrol with two women trying to catch the stagecoach back to the East. The tough and experienced Abby Allshard (Mildred Natwick) proves her mettle as a cavalry officer’s wife, but her attractive niece, Olivia (Joanne Dru), creates conflict between Brittles’ junior officers, Lieutenant Cohill (John Agar) and Lieutenant Pennell (Harry Carey, Jr.). With the brash younger chiefs of the tribes stirring up trouble and the women slowing his progress, Brittles must keep order within his ranks and strive to head off a deadly frontier war.

John Wayne gives a particularly sensitive performance that prefigures some of his later, more mature roles, especially those in which he takes on overtly paternal roles. In his early forties when he made this picture, Wayne is aged with a little makeup and a lot of gray hair to portray the older Captain Brittles, who dreads his retirement from the only life he has known for forty years. The usual Duke bravado is tempered by Brittles’ emotional attachment to his long dead wife, who lies buried in the fort’s cemetery along with his two small daughters. Brittles frequently visits the graves to tend to them and report on the day’s events. We understand that his fatherly interest in the headstrong Olivia has a lot to do with his yearning for his lost family; his own daughters might be about Olivia’s age had they lived, and he even tells his wife that Olivia reminds him of her. With the living he is less able to articulate his feelings; he silently pats Olivia on the shoulder and jokingly bickers with his devoted comrade, Sgt. Quincannon (Victor McLaglen), but the people around him know exactly how to interpret his behavior, and he is fiercely admired and respected by his men.

Ford stocks the supporting cast with his usual company of players, a reliable crowd of tremendously talented actors who lend both humor and gravitas to all of Ford’s films. Victor McLaglen provides comic relief as the thirsty sergeant who is following his captain into retirement, while Mildred Natwick brings great courage and warmth to her role as “Old Iron Pants,” the cavalry wife who only leaves the fort to get her niece away before the long, hard winter. John Agar and Harry Carey, Jr. both look fine in their blue uniforms, even if Carey seems a bit miscast as a privileged son of eastern wealth, but Ben Johnson steals their thunder with his charismatic, casually brave Southerner, Sgt. Tyree. It’s never clear why Olivia doesn’t set her sights on him instead of the other young men. Beautiful Joanne Dru, who had already starred with John Wayne in Red River (1948), makes an excellent Olivia; her strong chin and flashing eyes tell us that she could, in fact, “be Army” if she would just set aside her stubborn pride and settle on one of her suitors. Filling in the smaller roles are George O’Brien, Arthur Shields, and Chief John Big Tree as the elderly Pony That Walks, who laments that old men like himself and Brittles cannot stop young men from going to war.

She Wore a Yellow Ribbon won an Oscar for its sweeping Technicolor cinematography, making it the only Academy Award winner or nominee of the cavalry trilogy. For the full trio, see Fort Apache (1948) and Rio Grande (1950). John Ford’s best pictures with John Wayne include Stagecoach (1939), The Searchers (1956), and The Man Who Shot Liberty Valance (1962), though you’ll find Victor McLaglen and Mildred Natwick joining the director and star for memorable roles in the cherished Irish romance, The Quiet Man (1952). Catch Ben Johnson, Joanne Dru, and Harry Carey, Jr. in Ford’s Wagon Master (1950). Take time to appreciate Ford’s love affair with popular songs and music; just as “She Wore a Yellow Ribbon” dominates the score of this film, so “Streets of Laredo” informs 3 Godfathers (1948) and “My Darling Clementine” lends its yearning theme to the 1946 film that shares its name.
Posted by Jennifer Garlen at 11:28 AM