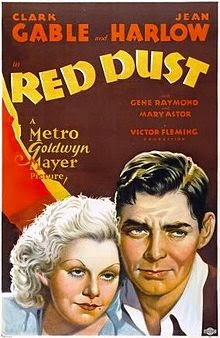 Steamy Pre-Code sensuality drives the plot of Victor Fleming’s Red Dust (1932), in which Clark Gable and Jean Harlow prove the powder keg appeal of their onscreen chemistry. The story unfolds against the equally heated backdrop of an exotic tropical location, where tigers and torrential rains mirror the violent natural forces at work in human hearts. Like many classic films with Eastern settings, Red Dust suffers from an Orientalist attitude toward the native workers and a horribly stereotypical Chinese domestic, but Gable and Harlow are so good that the movie works in spite of it, and Mary Astor gives an excellent performance as the married rival who loses her moral high ground by falling for Harlow’s man.

Gable stars as Dennis Carson, the head of a remote rubber plantation in Indochina. When his masculine world is invaded by streetwise Vantine (Jean Harlow), Carson complains loudly but soon takes advantage of the situation and Vantine’s considerable charms. Vantine hopes for a real relationship, but Carson throws her over when the well-heeled Barbara (Mary Astor) arrives with her naive husband, Gary (Gene Raymond). After Carson nurses Gary through a dangerous fever, he earns the younger man’s fervent admiration, which makes Carson feel guilty for his affair with Barbara. Jealousy erupts into violence as the monsoon season bears down and Gary finally begins to suspect Carson’s designs on his wife.

Red Dust was the second film in which both Gable and Harlow appeared but the first to capitalize on their sex appeal as leads; they work together so well because both have screen personalities that radiate toughness and animal lust. Gable looks like a guy whose idea of romance is a rough and tumble roll in the hay, and Harlow is just the kind of girl to like it that way. The surprise for us - and for Carson and Vantine - is that their attraction to each other becomes something more lasting and substantial. Carson chases Barbara because she appears as a rarity in his world, but it’s clear that she can never belong to it, and Gary’s boyish innocence is too pathetic and pure even for the worldly Carson to destroy. Vantine might be a woman of easy virtue, but she ultimately has more integrity than Barbara; she isn’t the one committing adultery on the heels of her honeymoon, and her lies protect both Gary and Barbara from their own foolishness. Their spontaneous acts of altruism and generosity assure us that Carson and Vantine deserve each other; whatever their faults, they’re better people than even they realize until the moment of truth arrives.

The setting for the story provides arresting images, from the tiger prowling the forest to Harlow naked in a rain barrel, but it also falls back on the usual clichés of lazy coolies and simple-minded house servants. The rubber plantation workers are represented as so much human cattle, with some pointed remarks about their eagerness to rape white women thrown in, but the most grating element for modern viewers is Willie Fung’s idiotic Hoy, who unfortunately gets the movie’s last line. Fung made a career of these kinds of roles, and it’s not his fault that parts for Asian actors were so limited in classic Hollywood, but his Chinese version of Stepin Fetchit is almost impossible to watch. Donald Crisp’s Guidon is an obnoxious drunk, but even he fares better than Hoy, who serves as the butt of a running gag that isn’t funny in the first place.

For more of Clark Gable and Jean Harlow, see Hold Your Man (1933), China Seas (1935), and Harlow’s final film, Saratoga (1937). Victor Fleming, who was uncredited as the director of Red Dust, is best remembered for his work on The Wizard of Oz (1939) and Gone with the Wind (1939), but he also worked with Harlow on Bombshell (1933). Look for Mary Astor in The Maltese Falcon (1941), The Palm Beach Story (1942), and Meet Me in St. Louis (1944). John Ford remade Red Dust as Mogambo in 1953, with Clark Gable starring once more; Ava Gardner and Grace Kelly both earned Oscar nominations for their performances as the female rivals for his love.
Posted by Jennifer Garlen at 4:46 PM