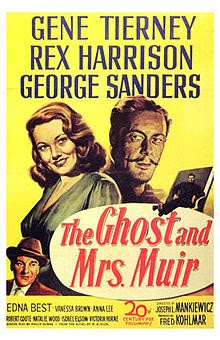 Long before Ghost (1990) moved audiences with its tale of supernatural romance, The Ghost and Mrs. Muir (1947) depicted the bittersweet love affair of a living woman and a spectral man. Director Joseph L. Mankiewicz crafts a story short on special effects but bursting with sentimental ambience, including a tender score by Bernard Herrmann and Oscar-nominated cinematography from Charles Lang. Rex Harrison and Gene Tierney give memorable performances as the title characters, while the solid collection of supporting players includes George Sanders, Edna Best, and a very young Natalie Wood.

Tierney stars as young widow Lucy Muir, who defies her husband’s manipulative family by relocating to a remote coastal town with her daughter (Natalie Wood) and housekeeper (Edna Best) in tow. In Gull Cottage Lucy discovers the ghost of the previous owner, a salty sea captain named Daniel Gregg (Rex Harrison). The two clash at first but eventually develop a deep bond; Gregg, however, cannot give the lonely widow the real companionship of a living man, and the arrival of a persuasive suitor (George Sanders) threatens to take Lucy away to a new life.

In the liminal space between land and sea, the living and the dead can meet and speak, but the film focuses on the romantic possibilities of this threshold rather than the frightening. Gull Cottage reveals itself to be not so much haunted as enchanted, since Daniel Gregg is the most solid looking specter in the history of ghost stories. Rex Harrison conveys his character’s ghostliness through his attitude as a man beyond life, resigned and sad but still capable of deep human feeling. He comes very close to Tierney’s yearning widow but never touches her; the audience experiences this separation as an almost unbearable romantic tension, which we realize torments the characters, as well. This reawakening of passion in Lucy’s heart has dangerous consequences, however, since it leaves her vulnerable to the more corporeal, if morally suspect, charms of George Sanders as the children’s book author, Miles Fairley.

Poignant performances sell the story far better than special effects. At the height of her career, Gene Tierney combines sentimental beauty with substance as Lucy, a heroine who must summon every ounce of her strength to break away from what others want for her in order to live her life on her own terms. Her abominable in-laws, played with relish by Isobel Elsom and Victoria Horne, give Lucy a chance to show her resolve early on, so that we believe in her as a woman unlikely to be deterred by a disagreeable ghost. Rex Harrison is perfectly cast as the gruff captain; known for his philandering and charismatic persona, Harrison has the roguish quality of a roving captain in spades but also reveals a touching sensibility. Natalie Wood gets very little screen time as Lucy’s daughter, Anna, but she’s convincing as a girl who might prefer tales of action and adventure to the treacly stories of “Uncle Neddy.” More significant is the contribution of Edna Best as the loyal housekeeper, Martha, whose solicitous care suggests some frailty about Lucy that is never really discussed. The friendship between Martha and Lucy transcends their professional relationship and helps to ground the picture in some real human warmth, which assures us that Lucy’s life is never as lonely as we might fear, even after Anna grows up and moves away.