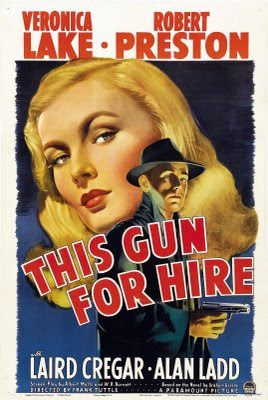 Patriotism is not a quality one expects in a noir film, but Frank Tuttle’s 1942 picture, This Gun for Hire, reflects the moment of its making. The theme, however, sits awkwardly with the more conventional elements of the genre, especially in the third act. Despite a high profile cast that includes Alan Ladd, Veronica Lake, Robert Preston, and Laird Cregar, This Gun for Hire doesn’t quite come together, and each of its stars can be found in better films.

Ladd plays Raven, a hired killer out for revenge after his most recent employers set him up as a fall guy to cover their own tracks. Raven wants to settle the score with the craven Willard Gates (Cregar) and his mysterious boss, but the cops are hot on the killer’s heels. Meanwhile, the government recruits Ellen Graham (Lake), a beautiful nightclub entertainer, to spy on Gates, and she ends up caught between Raven, the police, and Raven’s dangerous prey.

Ladd’s fatalistic hit man is meant to be psychologically unstable, and he does have several good scenes of wild-eyed psychosis, but his conversion to the patriotic cause rings false. Lake, one of noir’s most iconic leading ladies, seems oddly subdued and fragile. There’s little real chemistry between her and either Ladd or Robert Preston, who plays her perfectly dull cop boyfriend. Laird Cregar, always a formidable presence, threatens to walk off with the whole picture every time he appears on screen. His Gates might be a pervert and a coward, but he’s more fun to watch than anything else in the film. Cregar’s performances are always a reminder of the kind of star he might have become had he not died in 1944.

Aside from Cregar, other highlights include the novel idea of Lake as a singing magician who punctuates her musical numbers with sleight-of-hand tricks. Cregar also gets a memorable sidekick in Marc Lawrence, who plays Gates’ henchman with a delightful mix of humor and menace. Several scenes underscore Raven’s contrasting impulses toward humanity and brutality, with the hit that opens the picture serving as a particularly good example.

The movie falters mostly because it refuses to turn noir’s essentially cynical gaze on its flag-waving call to arms. Somewhere in the background lurks the possibility that Lady Liberty might be the picture’s real femme fatale, seducing the central characters into a series of lies and betrayals, but the neat ending suggests that Raven’s death, a foregone conclusion, might as well do his country some good. If he kills policemen and criminals alike along the way, well, that’s just eggs to make omelets, isn’t it?

This Gun for Hire made Alan Ladd a star, but he’s probably best remembered today for his performance in Shane (1953). See the lovely Veronica Lake in Sullivan’s Travels (1941). Robert Preston proves far more charismatic in his defining role in The Music Man (1962). The fabulous Laird Cregar can be seen in The Black Swan (1942), Heaven Can Wait (1943), The Lodger (1944), and Hangover Square (1945). You can also read more about Cregar in this Classic Movie 10 article at Examiner.com.
Posted by Jennifer Garlen at 5:24 PM