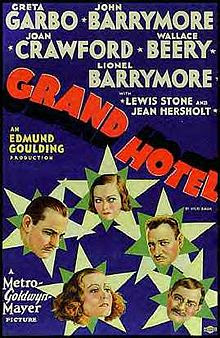 Directed by Edmund Goulding, Grand Hotel (1932) is unique in the annals of Oscar history; it is the only Best Picture winner not even to be nominated for any other awards. Despite the Academy’s odd response to the film, Grand Hotel offers a lot more to the modern viewer than mere Oscar trivia. The ensemble cast includes many of classic Hollywood’s greatest names, and the microcosm of the hotel offers a fascinating study of the human condition as experienced by its guests.

The plot follows the overlapping stories of several guests at the Grand Hotel in Berlin, including an unhappy ballerina (Greta Garbo), an impoverished baron (John Barrymore), a dying middle-class worker (Lionel Barrymore), a desperate industrialist (Wallace Beery), and a pragmatic stenographer (Joan Crawford). In just a few nights, their lives are changed forever, even as life goes on within the hotel and beyond its walls.

Each character plays an important part in the overall story, and each is connected to the others in some way, although the entire cast never assembles in a single scene. This is probably for the best because it becomes almost impossible to know which actor to watch when three or more of them get together in a shot, particularly when the two Barrymore brothers simultaneously interact with both Joan Crawford and Wallace Beery. There’s a tremendous amount of scene-stealing going on, even from Lewis Stone as the jaded doctor who wanders in and out of the picture like a one-man Greek chorus.

Twists of fate abound, particularly where John Barrymore’s Baron and Beery’s General Director Preysing are concerned. Their actions propel them toward an encounter that is as tragic as it is inevitable. The Baron, a rake and a thief, rediscovers his own better nature in the arms of the dancer Grusinskaya (Garbo), while the Director’s pretense of morality rapidly collapses under the strain of a crucial business deal. The other characters are more or less caught between them and their changing fortunes. Doom hangs over them all, and the ending only partly alleviates our sense of it. The wheel turns, and all are carried with it, a point underscored even by the porter (Jean Hersholt) awaiting the birth of his child.

Edmund Goulding also directed The Dawn Patrol (1938), Dark Victory (1939), and The Razor’s Edge (1946). See more of John Barrymore in Dinner at Eight (1933), Twentieth Century (1934), and the hilarious Midnight (1939). Brother Lionel is best remembered today as Mr. Potter in It’s a Wonderful Life (1946), but he played much more sympathetic characters in A Family Affair (1937), Captains Courageous (1937), and You Can’t Take It with You (1938). See Joan Crawford’s Oscar-winning performance in Mildred Pierce (1945) and Garbo’s great comedic role in Ninotchka (1939) for more of those iconic leading ladies. Wallace Beery tied Fredric March for Best Actor for his performance in The Champ (1931), but you can also find him playing Long John Silver in the 1934 adaptation of Treasure Island.
Posted by Jennifer Garlen at 9:21 PM