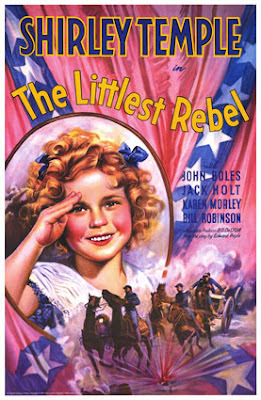 Before Gone with the Wind (1939), even before Jezebel (1938), there was another 1930s Civil War melodrama, also starring one of Hollywood’s top leading ladies as a Southern belle caught in the crossfire of the conflict. That would be The Littlest Rebel (1935), with a heroine played by that tiny dynamo of tap dancing charm, Shirley Temple. Directed by David Butler, The Littlest Rebel takes a decidedly optimistic view of the war in general, but it isn’t really any more sentimental or more problematic than those better known period films. In fact, Shirley’s character, Virgie, is a lot more sympathetic than either of the spoiled debs played by Vivien Leigh and Bette Davis, and we get some wonderful musical numbers from Bill Robinson to sweeten the deal.

Temple plays Virgie Cary, a true daughter of the Confederacy who lives with her adoring parents on a big plantation filled with remarkably contented slaves. When the war begins, her father (John Boles) goes away to fight, but her mother (Karen Morley) dies as a result of the ensuing hardships. Virgie’s father returns home to bury his wife, where he is captured by the Union, but Virgie reminds the commanding officer (Jack Holt) of his own child so much that he helps the father and daughter escape. Both men end up sentenced to death by the Union for their actions, and it’s up to Virgie and Uncle Billy (Bill Robinson) to appeal to President Lincoln (Frank McGlynn, Sr.) in order to save them.

Dickensian sentiment rules in The Littlest Rebel, especially during Mrs. Cary’s death scene, but the film’s attitudes would have gone over quite well in the era that the story depicts. Shirley is unapologetically adorable, and her dance routines with Robinson showcase her real talent as a performer. John Boles makes for a very handsome daddy, while Jack Holt provides a rougher exterior for contrast, even though he turns out to be just as susceptible to Shirley’s charms. Most of Shirley’s films involve the formation of a new family to replace one that the child protagonist has lost, but The Littlest Rebel is unusual in its decision to provide Virgie with two daddies to make up for the loss of her mother.

Children who watch the movie will need to talk over a number of issues with an adult. The war is represented as beyond Virgie’s comprehension, which is natural enough, but the 1935 depiction of racial issues is really almost as thorny as the concept of antebellum slavery. Shirley briefly appears in blackface (although for more or less practical purposes), and the slave children on the plantation treat her as a tiny queen. Bill Robinson’s character is relatively dignified, but Willie Best’s broadly comic slave, James Henry, belongs more to the Stepin Fetchit school. It’s worth noting that the Union soldiers in the movie aren’t any nicer to the slave characters than the Confederates, which makes one wonder what their motives for fighting are supposed to be.

If you like Shirley in The Littlest Rebel, there are plenty of other films to see. I’m particularly fond of her two pictures with director John Ford: Wee Willie Winkie (1937) and Fort Apache (1948), although both of them will appeal to grown-ups more than children. See more of John Boles in Stella Dallas (1937) and the Temple picture, Curly Top (1935). Don’t miss Stormy Weather (1943) for a really great showcase of Bill Robinson’s talents, although you can also find him with Shirley in The Little Colonel (1935), Rebecca of Sunnybrook Farm (1938), and Just Around the Corner (1938).
Posted by Jennifer Garlen at 11:25 PM