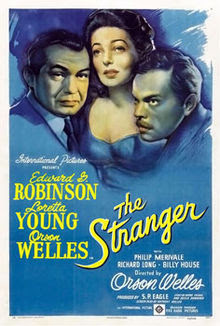 Orson Welles’ tense post-war thriller, The Stranger (1946), is not as famous as his most iconic films, but as an example of Wellesian noir it stands up very well against The Lady from Shanghai (1947) and Touch of Evil (1958), and it shares with both of them a delirious sense of the workings of fate. Filled with symbolic flourishes and characteristically dizzying camera work, The Stranger offers plenty of nail-biting excitement in the cat and mouse game being played by the two male leads, but it also provides an unusual perspective on the conventional noir good girl in its heroine, a woman who turns out to be less of a doormat than her husband believes.

Welles stars as Charles Rankin, a teacher hiding his past as a Nazi mastermind in a sleepy Connecticut town. To complete his disguise, Rankin weds the unsuspecting Mary (Loretta Young), the daughter of a prominent judge. Rankin’s secrets threaten to come to light when Wilson (Edward G. Robinson), a war crimes investigator, tracks him down. With his own life on the line, nobody is safe from Rankin’s desperate schemes, not even his surprisingly loyal wife.

Welles plays Rankin as a male femme fatale, a devious seducer with a tightly wound, even obsessive nature. The nervous, wild intensity of his gaze lets us know that he’s a psychopath long before the revelation of his concentration camp atrocities. Robinson is his polar opposite, calm and collected even in the most dangerous encounters. His character, Wilson, strongly resembles Barton Keyes in Double Indemnity (1944), in which Robinson also broke out of his gangster stereotype. The two men function as the living doubles of the devil and angel who pursue one another atop the town’s great clock; Rankin is a force of chaos and death, while Wilson comes brandishing the sword of justice. The ending might be heavy-handed where that symbolism is concerned, but it’s still very exciting to watch.

Loretta Young has a complex part to play as the victim of Rankin’s deception. He dismisses her as a convenient prop for his disguise, but he underestimates the power of her love for him and her outrage at his inevitable betrayal. It isn’t his past as a Nazi mass murderer that turns her against him, but his attempt to get rid of her as the only person whose testimony can destroy him. Noir fans who tire of the good girl’s incessant martyrdom will love the end of this film, where we find out that even the nicest girl has her limits.