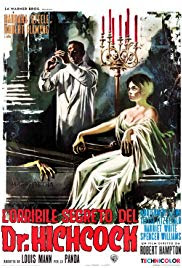 I'm a sucker for early 60s Gothic horror, whether it's Corman, Hammer, or Bava, which means my opinion of a picture like Riccardo Freda's The Horrible Dr. Hichcock (1962) is inclined to be positive in spite of its shortcomings. Yes, it's about a necrophiliac surgeon who like his bedmates totally incapacitated, and the dubbing is pretty ridiculous, as well, but it has that lurid charm that Gothic horrors of the period so often possess, plus there's Barbara Steele starring as the hapless second wife who little suspects her husband's sordid appetites. Suffused with references and allusions to the work of Alfred Hitchcock, as one might guess from the title, The Horrible Dr. Hichcock provides the viewer with ample entertainment and plenty to parse in terms of its relationships to other films.

Robert Flemyng plays Professor Bernard Hichcock, a London surgeon with a secret passion for dead women. His wife, Margaret (Maria Teresa Vianello, credited as Maria Fitzgerald), accommodates his desires by allowing him to anesthetize her before sex in a boudoir made up like a funeral chamber. Unfortunately for Margaret, Hichcock overdoses her one night and then leaves the country shortly after her interment in the family vault. Twelve years later he returns to London with his new wife, Cynthia (Barbara Steele), and resumes his medical practice as well as his lust for corpses. Cynthia soon suspects that Margaret is haunting the house with sinister plans for her replacement, but when Bernard discovers the truth about Margaret he makes lethal plans of his own to restore his first wife to her former place and beauty.

As Budd Wilkins observes in his Slant review of the film's Blu-ray release, The Horrible Dr. Hichcock borrows heavily from Alfred Hitchcock's Rebecca (1940), with nods to Suspicion (1941) and Vertigo (1958), as well, but there's also a strong connection to 19th century literary works like Robert Browning's "Porphyria's Lover" and Edgar Allan Poe's "Ligeia." (For a discussion of Gothic texts and the theme of necrophilia, see my essay, "Gothic Angels: The Good, Dead Girl in Robert Browning's 'Porphyria's Lover' and Alice Cooper's 'Cold Ethyl'.") Bernard's obsession with beautiful corpses is the logical, if extreme, endpoint of the Victorian fantasy of the angel in the house. Margaret is more than happy to play this role for him, while Cynthia resists it, which puts her in danger of being made a corpse for real by the forces that seek to uphold the patriarchy's rule that women be utterly passive. While Cynthia has a bad habit of fainting every time something interesting happens, she is nonetheless determined not to succumb to the threats around her without a struggle, and the audience's sympathy lies entirely with her.

As is often the case with horror, the villain has the best role, and Robert Flemyng makes Hichcock an intriguing study in masculine selfishness, self-loathing, and irresistible sexual desire. The best scenes are the ones where Hichcock struggles against his urges but inevitably yields to them, drawn like a moth to a flame whenever a beautiful corpse lies nearby. He's the quintessential Victorian gentleman of horror, all propriety in public but pulsing with depravity in private, a Jekyll and Hyde figure whose hidden nature Cynthia doesn't suspect until it's almost too late. As the film opens we see him ruthlessly assault a grave digger in order to molest the body being buried; later, he performs surgery to repair the damage done to the very same man, with admiring proteges and a grateful family never dreaming that the same hands both harmed and healed. His duality makes him fascinating, though not particularly sympathetic, since even at his best he's a condescending, patriarchal ruler who expects everyone around him to obey his commands, whether they be student, servant, or wife. When Cynthia tries to tell him about the mysterious presence in the house he gaslights her and says that her nerves are coming undone, but once he knows it's real he just intensifies the gaslighting to keep Cynthia from realizing her peril. That alone makes him a monster, but his mad plan to restore Margaret at Cynthia's expense shows just how unbalanced he becomes by the film's fiery conclusion.

Director Riccardo Freda, who often worked under the name Robert Hampton, also made Lust of the Vampire (1957), Caltiki, The Immortal Monster (1959), and The Ghost (1963). Don't miss scream queen Barbara Steele in Black Sunday (1960) and Pit and the Pendulum (1961); she also stars - this time as a character named Margaret Hichcock! - in The Ghost, which makes it an obvious second choice for a Freda double feature. You'll find Robert Flemyng in Funny Face (1957), The Deadly Affair (1967), and The Blood Beast Terror (1968).

Posted by Jennifer Garlen at 4:47 PM