A Quick Trip to TIFF19 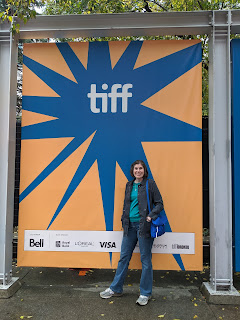 I've always wanted to attend film festivals, but they're few and far between where I live, and the timing has never worked out for me to get to the big one for classic movie fans, TCMFF. Luckily, my visit to my sister's new home in Toronto this month coincided with the second weekend of the Toronto International Film Festival. Even though this was just a quick visit to the festival, I enjoyed it very much, and it has only whetted my appetite to do more.

We didn't plan my trip far enough in advance to buy passes for the whole festival, but we were able to get tickets to see A Bump Along the Way, a comedic drama directed by Shelly Love and set in Northern Ireland. The story follows a middle aged, divorced mother and her teenage daughter, who both have a lot to handle when the mother unexpectedly gets pregnant after a one night stand. Both my sister and I loved this film and were so glad that we got to see it, particularly because it's not the sort of movie that's likely to turn up in wide release in the US. The film was a serendipitous discovery for both of us, which is exactly what you want to get from a film festival. We were sorry that we weren't able to get tickets for the big, sexy headliners like Jojo Rabbit, Knives Out, and Dolemite is My Name, but we know we'll get the chance to see all of those later. 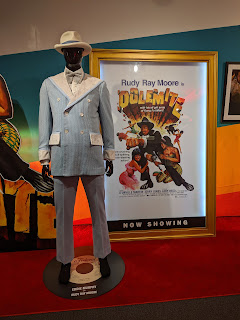 Speaking of Dolemite, we did get to see a wonderful costume and prop exhibit for the film in the TIFF Reference Library, which we didn't know was there until we wandered in. We thought we were going to see the free, permanent exhibit, so the costume display was another surprise treat. They even had free sunglasses for visitors to take home!

In the TIFF Shop we found lots of tempting books and festival swag, but in light of my current downsizing efforts I limited myself to a Midnight Madness t-shirt and a small festival poster. They did have an excellent selection of books, however, and someone in a more acquisitive stage of life might well fill a suitcase with purchases. The shop was jammed full of customers when we visited, as were all of the venues and streets in the festival area. It's always exciting to look around and see lots of people who love the same thing you love, and all around us festival goers were chatting about the movies they had seen, the movies they were going to see, and the movies they wanted to see but couldn't get tickets.

Our day at TIFF might have been brief, but it was packed with delights. I think even a short visit to a festival is definitely worth it, and the festival experience was a highlight of my trip. With my sister now settled in Toronto for the foreseeable future, I'm optimistic that I'll get to return to TIFF and enjoy more of its offerings next year!

Posted by Jennifer Garlen at 12:02 PM