Classic Films in Focus: HANDS OF THE RIPPER (1971) 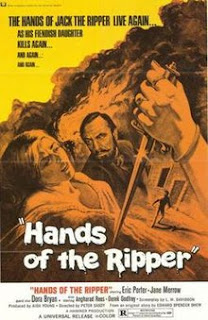 Hands of the Ripper (1971) is a gory Hammer horror foray into the much visited territory of Jack the Ripper mythology, this time focusing on the serial killer's imaginary daughter and the effects of being a witness to acts of extreme violence. While it has many of the customary elements of classic Hammer - namely bloody killings, a lush Victorian atmosphere, and buxom girls in various stages of undress - it comes up sadly short in the narrative department, mainly because its focus on Freudian psychoanalysis and compulsive behavior takes precedence over any effort to make its most important character actually interesting. The result is disappointing because Hands of the Ripper could be a much more sophisticated and engaging story than the one we get, in which a milquetoast and often catatonic girl suddenly becomes a killer every time the right stimuli occur.

Directed by Peter Sasdy, the film follows the psychologically damaged Anna (Angharad Rees) as she leaves a trail of corpses behind her. The daughter of Jack the Ripper, Anna witnessed her father murdering her mother but grew up an orphan with no memory of her past identity. Her murderous impulses are triggered when her employer, a fraudulent medium, accidentally recreates the stimuli that Anna experienced during her mother's gruesome death, but Anna is spirited away and protected by Dr. Pritchard (Eric Porter), who wants to study her using Freud's psychological methods. Soon members of Pritchard's own household are turning up dead, but the doctor cares more about his research than Anna's well-being or the lives of other people.

Visually there's a lot to like about Hands of the Ripper, from the flashing lights that mesmerize Anna to the delirious climax in the Whispering Gallery of St. Paul's Cathedral. The scenes of violence grow increasingly dreadful with each occurrence thanks to the persistent formula that stimulates them, with viewers waiting in suspense for the inevitable, innocent kiss that causes Anna to strike with the nearest sharp object. The scenes featuring prostitutes - and there's no shortage of them - are colorful and energetic in their earthiness, contrasting splendidly with the buttoned up, secret depravity of respectable gentlemen like Pritchard, Dysart, and even Jack himself.

Unfortunately, Anna remains a tabula rasa, a cipher without agency or personality, throughout the film, and outside her brief flashes of violence she does nothing at all. She's more like Conrad Veidt's sleepwalker in The Cabinet of Dr. Caligari (1920) than Laird Cregar's tortured killer in Hangover Square (1945), and that's a shame because the monstrous is always more powerful when the viewer pities and understands the struggle of the person who becomes monstrous. Anna never puts up much of a fight and barely even registers that anything has happened, which leaves the viewer with Pritchard as the only character whose motivations can be pondered to any degree. Pritchard, however, is deeply unsympathetic from the moment he lets Anna murder the housemaid and then covers it up without warning his family that he's brought a dangerous, uncontrollable killer into their home. His behavior smacks of paternalism and misogyny, especially because it doesn't seem to matter to him that Anna's victims are all women... until, of course, he finds himself on the receiving end of her violent compulsion. Pritchard, Dysart, and Jack all use Anna for their own ends, making all of them far worse monsters than the girl who never has any say in her own fate, but we don't feel like justice is served or karma balanced by the ending because the original author of all this suffering, Jack himself, cannot be held accountable for his crimes.

If you're interested in more developed female monsters and killers in other classic horror films, try Dracula's Daughter (1936), Cat People (1942), or The Vampire Lovers (1970). Peter Sasdy also directed the Hammer films, Taste the Blood of Dracula (1970) and Countess Dracula (1971). Eric Porter is best remembered for his leading role in the TV miniseries, The Forsyte Saga, while Angharad Rees starred in the 1970s TV series, Poldark. For more classic movies inspired by Jack the Ripper, you might try The Lodger (there are two films with the title, from 1927 and 1944, and both are about the Ripper) or the 1979 Sherlock Holmes thriller, Murder by Decree.
Posted by Jennifer Garlen at 5:47 PM