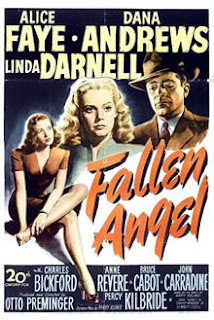 Otto Preminger directs this top-notch noir tale of misplaced love and murder, which stars Dana Andrews as a small-time grifter who falls for luscious Linda Darnell but woos wealthy Alice Faye. It's a love triangle with a couple of kinks thrown into it, and the title, Fallen Angel, might equally apply to Andrews or Darnell, both of whom exhibit the cynical worldview born of hard knocks and bitter disappointment. In addition to the trio of excellent leads, the picture boasts an impressive supporting cast that includes Anne Revere, Percy Kilbride, Bruce Cabot, Charles Bickford, and the always entertaining John Carradine as a traveling spiritualist who pretends to talk to the dead.

Eric Stanton (Dana Andrews) blows into town on his last dollar and promptly gets an eyeful of Linda Darnell's sultry Stella, sometime waitress at the diner run by Pop (Percy Kilbride). Like every other mook in the joint, Eric goes for the dark-haired beauty but can't convince her that he's not just another two-bit loser. In order to get enough money to marry Stella, Eric courts the maidenly June Mills (Alice Faye), much to the consternation of her elder sister, Clara (Anne Revere). Eric intends to marry and divorce June, but when Stella turns up dead on his wedding night, Eric finds himself on the list of suspects being pursued by Mark Judd (Charles Bickford), another of Stella's admirers who happens to be a cop.

Harry Kleiner's screenplay is adapted from the novel by Marty Holland, who also wrote the story of The File on Thelma Jordan (1950), and it shades Stella in particular with more nuance than we often see in a femme fatale. She never encourages Eric or any of the other men who hang around her like flies, and she makes it clear that she wants a wedding ring and a home before she'll take any guy into her arms. She steals a little cash from Pop's till, but she's no monster; Eric is the one who hatches the plan to seduce and betray June, not Stella. Nonetheless, the film sets Stella up as the fallen angel, the beautiful but bad girl, especially in the way it introduces her. We're encouraged to think of her that way even as the picture slowly reveals how little Stella deserves her fate and how much more fallen Eric is than Stella has ever been.

Andrews is in fine noir form as Eric; it's the kind of role that lets him use both his charm and his edge of jaded ruthlessness. He talks his way into Professor Madley's spiritualist racket and then into June's good graces, but he has a lot more trouble sweet-talking the justly skeptical Stella. Perhaps that's why he likes her so much in the first place. The audience is left to wonder if June's virtuous love is enough to reform Eric, especially when we know he only marries her for the cash. Alice Faye, of course, is perfect as June; if Eric and Stella are both fallen angels, June is still wearing her halo in Heaven. Faye is one of the few actresses who can make such a good girl role appealing, and late in the film she gets a chance to reveal the sturdy spirit that Junes possesses in addition to her virtue. June might have married a man she barely knows, but when she takes a vow she means it, and that comes as quite a revelation to Eric.

Take time to savor the performances by Carradine, Revere, and Kilbride in their supporting roles; Kilbride has a particularly fine moment right at the end, when the depth of Pop's devotion finally transcends the pathetic. For more Otto Preminger noir with Dana Andrews, see Laura (1944) and Where the Sidewalk Ends (1950). Preminger also directs Linda Darnell in Forever Amber (1947) and The 13th Letter (1951). Alice Faye is remembered more for films like In Old Chicago (1938), That Night in Rio (1941), and the colorful wartime musical, The Gang's All Here (1943). You'll find Charles Bickford and Anne Revere in The Song of Bernadette (1943), while Percy Kilbride is best known today for his starring role as Pa Kettle in the Ma and Pa Kettle films, starting with The Egg and I (1947).
Posted by Jennifer Garlen at 5:33 PM