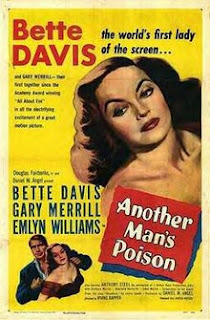 Adapted from a stage play by Leslie Sands, Another Man's Poison (1951) offers a wickedly ironic title and a chance for Bette Davis to sink her teeth into another maneater role, this time as the femme fatale protagonist of a devious noir plot. Irving Rapper directs Davis and her real-life husband at the time, Gary Merrill, as two unscrupulous people entangled in their own lies, and they do have a palpable - if violent - chemistry. Despite the location shoot at the brooding Malham Tarn Estate, the movie never quite shakes its stage roots, but Davis and Merrill make up for that in spades with their knack for driving each other into a rage. The lies and violence build to a pitch-black finale that will satisfy the most cynical film noir fan.

Davis schemes as Janet Frobisher, a mystery novelist occupying a grand home in a remote English village. When bank robber George Bates (Gary Merrill) comes looking for Janet's long absent husband, he finds that Janet has already dispatched her criminal spouse. George decides to fill the vacancy by pretending to be the man of the house, a plan Janet doesn't appreciate, especially when George suggests it's a permanent arrangement. Janet has her own plans regarding her secretary's handsome fiance, Larry (Anthony Steel), and she worries about keeping up the deception with her neighbor, Dr. Henderson (Emlyn Williams), who is constantly dropping by.

It quickly becomes apparent that Janet has no redeeming qualities whatsoever, which enables Davis to play her villainous nature to the hilt. There's no moral gray area here; the only thing Janet gives a damn about is her horse, Fury, and everyone else in the world can go to Hell for all she cares. She has no pity for her innocent secretary, Chris (Barbara Murray), from whom she steals the attractive Larry simply because she can. She poisons her husband not because he's a criminal and a terrible person but because she just doesn't want him around, and then she gets George to dump his corpse into the tarn. Later, she works hard to get rid of George, too. When karma catches up with Janet, it's a delicious bit of payback that the audience relishes, and Davis knows exactly how to exploit our loathing for her character.

Merrill's George is also reprehensible, especially in his sexist assumption that he can outfox Janet, but he's never as clever as she is. He develops a strange jealousy of Larry, seemingly buying into his own usurped rights as Janet's husband; he's furious that she keeps the door joining their bedrooms locked even though he's a total stranger. George is not quite as cold-hearted as Janet when it comes to murder; he first shows up because Janet's husband shot the policeman in the bank heist that went wrong, and George wants his name cleared in the killing. He pales when Janet suggests that her husband was actually alive when George pitched him into the tarn, and he's shocked when he realizes that Janet is trying to kill him, too. He even offers a little romantic advice to Chris to help her hold onto Larry, but that doesn't make him a good guy. When he takes out his anger on Janet's horse, he crosses a line with her and the audience's sympathy. We all know from there that there's no going back.

Enjoy the more subtle twists of Emlyn Williams' performance as the neighborly vet who keeps asking for his deadly horse medicine back; he's as close as we get to a detective in this film. Davis and Merrill made three pictures together; the other two are All About Eve (1950) and Phone Call from a Stranger (1952). Irving Rapper also directed Bette Davis in Now, Voyager (1942), The Corn is Green (1945), and Deception (1946). Look for Emlyn Williams in I, Claudius (1937) and Ivanhoe (1952), and see Anthony Steel in The Master of Ballantrae (1953)

Posted by Jennifer Garlen at 1:39 PM