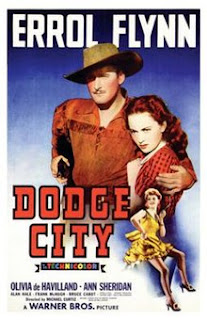 Michael Curtiz directs Errol Flynn in Dodge City (1939), the first of the swashbuckling star's forays into Western territory, with frequent costars Olivia de Havilland and Alan Hale along for the action, as well. Briskly paced and packed with excitement, Dodge City forgoes elegaic musings on the closing of the West and instead celebrates its taming as Flynn's cattle driver turned lawman fights to bring civilization to lawless Dodge. Flynn and de Havilland spark against a bright Technicolor backdrop while an excellent supporting cast fills out the archetypes of the genre, including Bruce Cabot as the ruthless villain and Ann Sheridan as his saloon singer girlfriend.

Flynn stars as Wade Hatton, a roving Irishman whose latest American adventure is running cattle from Texas to Dodge City. He meets Abbie (Olivia de Havilland) as a wagon passenger accompanying the drive, but the death of her feckless brother on the trail sours their budding romance. In Dodge Hatton finds an old enemy, Jeff Surrett (Bruce Cabot), running the town with the help of his murderous lackeys, and Hatton eventually agrees to take up the sheriff's badge in order to beat Surrett and make Dodge safe for frontier families. Surrett, however, will stop at nothing to hang on to his power; numerous innocent people die as a result of his corruption and greed.

Flynn's accent marks him as a recent arrival to the West even if he doesn't sound a bit like an Irishman, but the good looks and vigor that make him so compelling in derring-do serve him just as well in a cattle driver's saddle. His character pursues romance and justice in equal measure, leaving the dirty work of a huge, comic brawl to sidekicks Rusty (Alan Hale) and Tex (Guinn Williams). The heroic Hatton is well-matched by the villainous Surrett, played to cool effect by Bruce Cabot, who always looks at home in a Western setting. The women, sadly, have less to do. Olivia de Havilland's Abbie endures some egregiously sexist chatter from Flynn in a wrong-headed attempt at flirtation, but we still get the sense that she has a durable, pioneer spirit that attracts him just as much as her luminous beauty. Ann Sheridan turns up for a couple of song numbers but seems to be missing the good girl/bad girl subplot that would give her character more development. In Destry Rides Again (1939) and Stagecoach (1939), both released in the same year, Sheridan's type of character shines, but there's just no room left to explore her motivations or even her fate in the bustling pace of Dodge City.

Small roles in the film feature a number of memorable actors turning in fine performances, most notably Victor Jory as Surrett's saturnine henchman, Yancey. The sympathetic characters tend toward tragedy, but adversity gives the performers an opportunity to make their scenes resonate with the audience. Frank McHugh is excellent as the feisty crusading journalist Joe Clemens, whom Surrett hates for daring to expose murder and corruption in the local headlines. Amiable Henry Travers appears as Abbie's uncle, Dr. Irving, a figure of respectability and the kind of man Dodge needs more of instead of the wild ruffians who roam the streets. The tragic Cole family includes John Litel as the father, Bobs Watson as the precocious Harry, and Gloria Holden as the grieving Mrs. Cole. Holden makes the most of her one big scene in the newspaper office, investing her few lines with all the suppressed suffering and resignation we imagine she would feel. Also making the most of a limited role is William Lundigan as Abbie's wastrel brother, Lee, who is too young and stupid to understand the danger of his actions until it's too late.

The Private Lives of Elizabeth and Essex (1939)

Posted by Jennifer Garlen at 3:01 PM