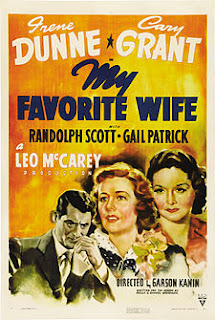 My Favorite Wife (1940) reunites stars Irene Dunne and Cary Grant after their first pairing as a comedic couple in The Awful Truth (1937), and once again there's both love and trouble. Grant plays a husband flummoxed by the return of his supposedly dead first wife on the very day that he marries his second, a situation that creates plenty of laughs as the original pair try to account for themselves and straighten out the mess that fate has handed them. While The Awful Truth might be the more perfect example of screwball comedy, My Favorite Wife has its own peculiar charms, especially in Grant's hilarious jealousy of Randolph Scott, who plays a rival for Dunne's affections.

Grant stars as accidental bigamist Nick Arden, who has his first wife declared legally dead seven years after her ship wrecked so that he can marry second wife, Bianca (Gail Patrick). The original Mrs. Arden, Ellen (Irene Dunne), is very much alive, however, and promptly turns up looking to resume her old life. Chaos reigns as Nick tries to figure out how to break the news to Bianca, who begins to think that Nick is suffering from psychological problems. Ellen, meanwhile, has neglected to tell Nick that she wasn't alone on that island for seven years, or that her companion, Stephen (Randolph Scott), is a paragon of masculinity who also has a romantic interest in Ellen.

The story focuses on the comedic opportunities in this setup, so we get only the faintest hints at the grief Nick must have endured after Ellen's disappearance or the heartache Ellen feels at missing seven years of her children's lives. It can't have been all bad, though, since Ellen and Stephen look more like they spent those years at some cushy island resort rather than scrounging for coconuts on a deserted scrap of sand. It was such a nice island, in fact, that Stephen wants to go back and take Ellen with him. Most of the suffering we really see in the movie is meant to be laughed at, with Nick and his new bride, Bianca, enduring the worst torments. Ellen worries about telling the children that she is their long-lost mother, but she primarily functions as a chaos agent to upend Nick's life and push Bianca out of her usurped position.

Dunne dives into a series of zany antics while Grant reacts to them, and the arrangement serves both of them quite well. Nick's reaction on first seeing Ellen alive is a quintessential bit of Grant hilarity, as is Nick's final bumbling effort to bed down in an uncomfortable attic room when he wants to be in the bedroom with his wife. Nick's jealousy of Stephen is especially funny if you know that Grant and Randolph Scott were great friends who lived together off and on for twelve years (there is some speculation that they were lovers). It's therefore rather provocative, and also truly delightful, to see the image of the scantily clad Scott somersaulting around Grant's head as Nick obsesses over the "Adam" to his wife's "Eve." The only weak link in the quartet is Gail Patrick as Bianca, who isn't nice to enough to feel really sorry for but isn't mean enough to hate, either. We need to see her threaten the Arden children with boarding school or flirt with another man in order to feel that she deserves her humiliation and defeat, but she comes across as a rather ordinary girl baffled by her groom's mad behavior. She never has a chance against Ellen, but it would be nice to see the competition at least be interesting.

My Favorite Wife picked up three Oscar nominations for writing, art direction, and score. Garson Kanin, who directed the picture, was primarily a writer but also directed the very funny Bachelor Mother (1939). For more of Irene Dunne, see Love Affair (1939) and I Remember Mama (1948) as well as her third and final collaboration with Grant, Penny Serenade (1941). Grant was busy in 1940; his other films that year include His Girl Friday and, of course, The Philadelphia Story. Rugged Randolph Scott is best remembered as the star of many Westerns, especially 7 Men from Now (1956), The Tall T (1957), and Ride the High Country (1962). Look for Alabama native Gail Patrick in My Man Godfrey (1936). Scotty Beckett, who plays young Tim Arden, was a popular child star whose other films include Kings Row (1942) and A Date with Judy (1948), but his biography is another tragic tale of early stardom's awful price.
Posted by Jennifer Garlen at 12:02 PM