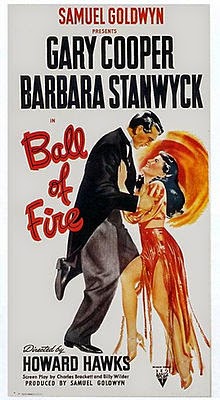 In Howard Hawks' Ball of Fire (1941), Barbara Stanwyck turns her tough dame persona to comedic purpose, a feat she also performed that year in the Preston Sturges comedy, The Lady Eve (1941). Both are terrific examples of the screwball genre, but while the Sturges picture relies on biblical allusions, the Hawks film ventures into the world of fairy tales. The ball of fire that Stanwyck plays in this movie is a street savvy Snow White, a little drifted perhaps, but still sweet enough to charm seven reclusive professors and one very inexperienced Prince Charming, represented to great effect by Gary Cooper. With Hawks' lively direction, a brilliant screenplay by Billy Wilder and Charles Brackett, and winning performances from Stanwyck and Cooper, Ball of Fire has plenty to offer already, but it becomes a veritable treasure trove of delights thanks to a supporting cast that includes Dana Andrews, Dan Duryea, Henry Travers, Oskar Homolka, S.Z. Sakall, and an utterly unrecognizable Richard Haydn.

Stanwyck plays nightclub singer and mobster moll Sugarpuss O'Shea, who has to hide out from the district attorney's office when her boyfriend, Joe Lilac (Dana Andrews), is pinned for a murder rap. A perfect spot conveniently appears at the home of a group of professors working on an encyclopedia. The grammarian, Professor Potts (Gary Cooper), needs a consultant about modern slang, and Sugarpuss certainly knows her way around a colorful phrase. Sugarpuss takes up residence in the house, much to the delight of the seven elderly professors and the bewilderment of the much younger Potts, and soon enough the bashful scholar falls for the duplicitous dame. Joe Lilac, however, has his own plans for Sugarpuss, and the mild-mannered academics must take on a crew of gun-toting gangsters to help true love conquer all.

Cooper is surprisingly hilarious as the straight arrow Potts, but Stanwyck gets all of the best lines, thanks to a plot that hinges on her character's knowledge of slang. Always a great talker, the actress gets dialogue that really zings in this picture, although the modern viewer might sometimes be as befuddled as Professor Potts about what it all means. Slinging slang from "corny" to "yum yum," Stanwyck's character teaches Potts a previously unknown physical vocabulary, as well, making the kissing scenes especially fun. In gowns designed by Edith Head, Stanwyck is truly radiant, particularly in a spangled number that catches the light just so to throw sparkles onto the screen and stardust into Cooper's eyes. Cooper makes a perfect match for the actress; his Potts is a dynamic character, stuffy and focused at first, then suspicious and confused, and at last a head over heels romantic driven by love. He ends the picture a yodeling, boxing man on fire. It turns out that kisses can wake up Prince Charming just as well as they work on Snow White.

The supporting players are all winners, from Dana Andrews as the scheming Joe Lilac to Allen Jenkins as the garbage man, but the actors playing the professors are some of classic film's most beloved characters. They give the animated dwarfs of Snow White (1937) plenty of competition for cartoonish appeal with their quirky passions and odd bodies. Familiar faces abound. S.Z. Sakall and Leonid Kinskey are both remembered by most viewers for their roles in Casablanca (1942), while Henry Travers is best known as the bumbling angel of It's a Wonderful Life (1946). Oskar Homolka, who had played the heavy in Hitchcock's Sabotage (1936), proves a scene-stealer among the group, especially when his character attempts to drive. The most memorable of the bunch, however, turns out to be Richard Haydn, heavily made up as Professor Oddly and employing the same bizarre voice he would later use as the Caterpillar in Alice in Wonderland (1951). A widower and a botanist, Oddly trades laughs for sentimental tears in his best scene, in which he recalls his love for his long dead wife. It's almost impossible to recognize the actor known today as Max in The Sound of Music (1965), but Haydn it is, making his second big screen appearance at the age of 36, four years younger than Gary Cooper.

Take a moment to appreciate Kathleen Howard and Mary Field as the movie's other women, and be sure to notice Elisha Cook, Jr. in a bit role early on. Ball of Fire earned four Oscar nominations, including a nod for Stanwyck as Best Actress, but went home empty-handed. For more comedy from Howard Hawks, try Twentieth Century (1934), Bringing Up Baby (1938), and Gentlemen Prefer Blondes (1953). Survey Barbara Stanwyck's remarkable career with Baby Face (1933), Double Indemnity (1944), and The Furies (1950). Gary Cooper won Best Actor Oscars for Sergeant York (1940) and High Noon (1952), and he also stars with Stanwyck in Meet John Doe (1941) and Blowing Wild (1953). Get a better view of Dana Andrews in Laura (1944), and don't miss Dan Duryea in Scarlet Street (1945).
Posted by Jennifer Garlen at 3:22 PM