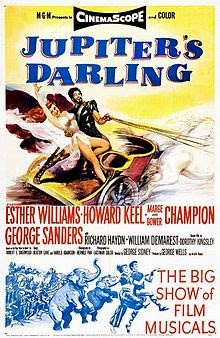 Even the novice viewer probably knows to expect some swimming scenes in an Esther Williams picture, but Jupiter's Darling (1955) is less aquatic than the screen star's most memorable outings, and it suffers from other problems, as well. Directed by George Sidney, who certainly was capable of better work, Jupiter's Darling isn't utterly terrible but still belongs squarely in the league of second raters, thanks to a thin plot, an appallingly sexist attitude, and the misuse of Williams' best attributes. For the dedicated classic movie fan, the consolations are plenty of color, some fun dance sequences from Marge and Gower Champion, and the presence of favorites like Howard Keel, George Sanders, and William Demarest.

Williams stars as Amytis, the betrothed of the Dictator of Rome (George Sanders) during a perilous time. Hannibal (Howard Keel) and his army sit at the outskirts of the great city, ready to sack Rome and burn it to the ground. With her personal slave, Meta (Marge Champion), in tow, Amytis sneaks out for a look at the manly conqueror, but she ends up being taken prisoner. Amytis and Hannibal then engage in a frequently violent battle of the sexes, with the fate of Rome hanging in the balance.

The ancient setting provides eye-popping costumes and backgrounds, including a Roman bath where Williams indulges in watery antics, and it even justifies the presence of numerous elephants as part of Hannibal's military equipment. The pachyderms, though not very warlike, make for really unusual dance partners for Marge and Gower Champion in one of the silliest but most amusing musical scenes. Howard Keel also delivers one of his songs from atop an elephant, but that's just the kind of over-the-top moment one expects from him. Nothing about the location is meant to be realistic; this story is more mythology than history. Unfortunately, it also relies on some grossly outdated sexual politics that it wants us to wink at rather than protest. It's hard to see Keel's Hannibal as a desirable mate when he repeatedly attempts to have Amytis executed, and even when they get along their romance has a bestial, brutal quality to it. Really, between him and George Sanders' stuffy Fabius, the Vestal Virgins start to look like a good alternative.

Keel has plenty to do, though Sanders and William Demarest are sadly underused, and Williams ought to spend more time swimming and less singing (dubbed, of course). All of the best scenes really belong to the Champions, who are in their element doing energetic dance numbers that are more interesting than the songs themselves. The tired tropes of Jupiter's Darling signal the end of Williams' heyday; she starred in a drama, The Unguarded Moment (1956), a year later, but her best pictures were all behind her. The type of musical that had sustained Williams, Keel, and the Champions was on its way out, too. Even Keel, the biggest star of the bunch, moved into Westerns and TV appearances as the 1960s dawned.

Look for Richard Haydn, Norma Varden, and Douglass Dumbrille in minor supporting roles. For a proper introduction to Esther Williams, go with Neptune's Daughter (1949) or Dangerous When Wet (1953), in which William Demarest has a much better role as the heroine's dad. Howard Keel, the poster boy for musical battles of the sexes, stars in Annie Get Your Gun (1950), Kiss Me Kate (1953), and Seven Brides for Seven Brothers (1954); the first two movies are also the work of director George Sidney. Keel and Sidney team with the Champions for the 1951 version of Show Boat, but you can also find the Champions in Give a Girl a Break (1953) and Three for the Show (1955).