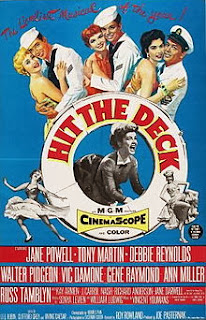 Like the more celebrated musical, On the Town (1949), Hit the Deck (1955) tells the story of three sailors looking for love during a brief shore leave, although in this case the action takes place in San Francisco rather than New York City. The two movies also share a common star in Ann Miller, who plays a sailor's love interest in both pictures; in this later production, Miller is joined by Debbie Reynolds and Jane Powell as the other two leading ladies, a combination that makes Hit the Deck worth watching all by itself. The sailors, played by Tony Martin, Russ Tamblyn, and Vic Damone, certainly have their hands full with this trio of song and dance icons, and the movie offers each star an opportunity to shine. Hit the Deck is not, perhaps, a truly great musical, but it offers plenty of colorful fun for fans of the genre and its stars.

Tony Martin brings the characters together as Bill, who asks his irate girlfriend, Ginger (Ann Miller), to find dates for his pals during their shore leave. Sick of waiting for a marriage proposal, Ginger throws Bill out, but Danny (Russ Tamblyn) finds a girl for himself when he meets Carol (Debbie Reynolds). Meanwhile, Danny's sister, Susan (Jane Powell), flirts with a much older man (Gene Raymond), which inspires Danny and his friends to invade the lovers' interlude in order to protect Susan's virtue. The fight with Susan's admirer lands the boys in hot water with the shore patrol, but it also gives Rico (Vic Damone) a chance to get acquainted with Danny's sister.

Martin and Miller play the older, more experienced couple here, with a long protracted engagement that has soured their relationship. Ginger's profession as a club performer gives Miller plenty of song and dance numbers and some eye-popping costumes that show off her famous legs, while her tempestuous relationship with Bill suits the actress' strong screen personality. Damone and Powell are the middle pair, getting their romance off to a rocky start as Rico forcibly hauls Susan out of her admirer's hotel room, and Tamblyn and Reynolds are both energetically cute as the kids of the gang. An additional, and perhaps unnecessary, romantic plot involves Rico's mother (Kay Armen) and a middle-aged florist (J. Carrol Naish), but their story is sweet enough to make the padding forgivable.

None of the songs in Hit the Deck has that unforgettable quality that marks a superior musical, although "The Lady of the Bayou" showcases Ann Miller's ample charms, and the fun house sequence makes great use of Tamblyn and Reynolds' youthful pep. The sense of deja vu one might experience on seeing the picture is not due solely to the parallels with On the Town; the original stage play by Hubert Osborne had already been adapted as a 1925 silent film with Richard Barthelmess and as the better known 1936 picture, Follow the Fleet, with Fred Astaire, Ginger Rogers, and Randolph Scott. Despite suffering somewhat from comparisons with these other musicals, Hit the Deck does have a few extra attractions to offer, including Walter Pidgeon as Danny's rear admiral dad, Jane Darwell as the admiral's housekeeper, and Richard Anderson in a small but memorable role as a Navy lieutenant.