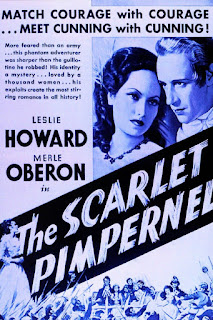 Adapted from the thrilling tales penned by Baroness Orczy in the first years of the twentieth century, The Scarlet Pimpernel (1934) is an essential part of the swashbuckler genre even though it's not exactly an action picture. Instead, Leslie Howard and Merle Oberon, its stars, are primarily involved in the romantic difficulties that arise when couples keep secrets from each other, but their rocky relationship provides plenty of melodrama to make up for the missing fight scenes. The original novel's themes would become ingrained in later swashbucklers and super hero stories, but the 1934 version of The Scarlet Pimpernel is enjoyable for its own merits as well as its influence, and Leslie Howard is particularly fun to watch in his duplicitous role as the daring Pimpernel hiding behind the persona of a superficial fop.

Howard stars as the English gentleman Sir Percy Blakeney, who rescues French aristocrats from the guillotine in the bloodiest days of the French Revolution. To protect his mission, Percy presents himself as a vain, foolish lightweight in London, where French spies are doggedly trying to unmask the hero and his band. Even Percy's beautiful French wife, Marguerite (Merle Oberon), doesn't know the truth, which leaves her unhappy with her seemingly shallow husband. When the villainous Chauvelin (Raymond Massey) offers to trade Marguerite's captured brother for the Pimpernel, she doesn't know that her husband's life is on the line. Percy, meanwhile, launches his own effort to rescue his brother-in-law and other prisoners of Robespierre's merciless regime.

He might not be engaging in any sword fights, but Leslie Howard is very much the star of this picture, and he gives a delightful performance as both daring, brilliant hero and outrageously refined fop. The playboy act that hides a secret identity is, of course, well-known to fans of Zorro and Batman, but Howard's Percy takes pains to be as vapid and useless as possible. He abandons any interest in preserving his dignity or reputation, even to his own wife, mainly because he believes that she exposed a French family to arrest and execution before her departure from France. The tension between Howard and Oberon crackles as they alternately long for and distrust one another; they duel with sharp glances and burning hearts rather than swords, but they're really the chief combatants in this tale. Merle Oberon is perfectly cast as the passionate, fascinating Marguerite; we understand why Percy loves her even when he thinks the worst of her, and she carries the third act in truly heroic fashion. Sir Percy fights with his disguises and schemes rather than weapons, which makes him a more cerebral hero than some of his swashbuckling brethren, but his penchant for dressing up connects him with Robin Hood, Sherlock Holmes, Zorro, and other clever tricksters, and the intellectual nature of the Pimpernel's heroism suits Howard really well.

While it eschews the violence of duels, The Scarlet Pimpernel endeavors to convey the horrors of the French Revolution as poignantly as possible, especially in the opening scenes of the film. You won't actually see heads chopped off and held high for the cheering crowds, but you might think you did because of the careful way the shots are constructed. The most powerful scene unfolds in the prison where the former aristocrats await their fate; the camera lingers especially on women and young children, some innocently playing or passing the time, others posed like martyrs with their eyes turned toward Heaven. Here we are introduced to Suzanne de Tournay (Joan Gardner) and her parents, whom the Pimpernel risks his own life to save. They help us invest in the plight of the overthrown aristocrats and sympathize with Sir Percy's cause even if we know the gross inequality and lofty ideals that first set the Revolution in motion. The movie ends with the Revolution still underway, but most people know that the mastermind, Robespierre, who in the film gives the fictional Chauvelin his orders, would meet the guillotine himself in 1794. By the end of the Reign of Terror, almost 17,000 people had been executed.

A TV movie adaptation of The Scarlet Pimpernel appeared in 1982 and is beloved by many Gen Xers; it's well worth tracking down if you want a different take on the story. If you enjoy seeing Leslie Howard in quirkier roles, see It's Love I'm After (1937) and Pygmalion (1938). Howard returned to a Pimpernel inspired role in Pimpernel Smith (1941), this time rescuing victims of the Nazis in Germany. Don't miss Merle Oberon in The Dark Angel (1935), Wuthering Heights (1939), and The Lodger (1944). Harold Young, who directed The Scarlet Pimpernel, is not particularly well known today, but his career includes some minor horror entries like The Mummy's Tomb (1942), The Frozen Ghost (1945), and The Jungle Captive (1945).

Posted by Jennifer Garlen at 3:49 PM