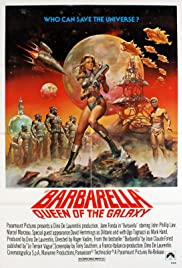 I have frequently declared my affection for movies that are more entertaining than they are good, so it shouldn't surprise anyone that I enjoy the bizarre spectacle of Barbarella (1968) even if it makes no effort to make any sense. Produced by Dino De Laurentiis and directed by Roger Vadim, this adaptation of a French comic book is very much of its era, with sex on its mind and shag carpet covering every inch of its hedonistic heart. It doesn't take itself seriously, and the viewer shouldn't take it seriously, either, but its silliness is part of its appeal, along with the undeniable charms of the very lovely Jane Fonda as its eponymous heroine.

Fonda plays the enlightened space navigatrix who ventures onto a barbaric planet in search of the missing scientist, Durand-Durand (Milo O'Shea). Startled at first by the primitive sexual practices of the locals, she soon develops an appreciation for old-fashioned coitus and proceeds to enjoy encounters with a hairy child catcher (Ugo Tognazzi) and a beautiful blind angel (John Phillip Law) before reverting to her own culture's use of pills for a mind melding tryst with the freedom fighter Dildano (David Hemmings). She eventually makes her way to a city of pure evil where both Durand-Durand and the sadistic ruler, known as The Great Tyrant (Anita Pallenberg), attempt to destroy her and her new friends.

Whatever one's critical opinion of Barbarella, its title as a cult classic cannot be disputed, thanks to its own wacky but memorable images and its influence on the iconic 80s band, Duran Duran, who named their group for its villain and even doubled down on the connection with the 1997 single, "Electric Barbarella." The picture provides an intriguing alternative to the male dominated science fiction adventures that preceded it in both comics and film, including Buck Rogers and Flash Gordon, but it also draws from a deep well of influence in the literary and cinematic history of women's sexual escapades, whether that be a pornographic classic like Fanny Hill (1748) or a Pre-Code picture like Madam Satan (1930). Jane Fonda would go on to earn seven Oscar nominations for Best Actress with two wins, which better fit with her legacy as the daughter of Henry Fonda, but her performance as Barbarella is no less entertaining for being out of line with the rest of her career, though it does overlap in several ways with her work in Cat Ballou (1965), another genre comedy that never takes itself seriously.

If Barbarella is your idea of a good time, revel in the weird charms of other cult sci-fi classics like The Blob (1958), Fiend Without a Face (1958), The Brain That Wouldn't Die (1962), or The Horror of Party Beach (1964). Terry Southern, who wrote the screenplay for Barbarella, earned Oscar nominations for his work on Dr. Strangelove (1964) and Easy Rider (1969), and he wrote the original novel that was adapted into the sex-fueled 1968 film, Candy, where you'll find a host of familiar stars and Anita Pallenberg. Roger Vadim, who was married to Fonda when they made Barbarella, also directed the 1960 vampire picture, Blood and Roses, which I recommend if you're a fan of variations on Sheridan Le Fanu's Carmilla.

Posted by Jennifer Garlen at 3:06 PM