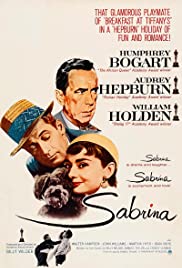 After her breakout success in Roman Holiday (1953), Audrey Hepburn cemented her image as a charming romantic heroine with Sabrina (1954), in which she plays a beautiful ingenue who pines for affection from a wealthy, older man. Along with its love story, Sabrina offers a very tame exploration of upstairs downstairs concerns unfolding in a world of extravagant power and privilege, but few people come to the movie looking for thoughtful class analysis. Instead, Sabrina offers the irresistible appeal of Hepburn herself and the love triangle created by William Holden and Humphrey Bogart as the two brothers who both fall for her. As its "once upon a time" opening makes clear, Sabrina is a modern fairy tale, a Cinderella story about a chauffeur's daughter and a New York prince, and if fairy tale romance is what you seek then this picture certainly delivers. I enjoy Sabrina mainly because of Hepburn's powerful charisma as its star, but I'm not romantic enough to ignore its various flaws.

Hepburn plays the title character, who grows up on the estate of the fabulously wealthy Larrabee family where her father (John Williams) serves as the chauffeur. From childhood Sabrina has yearned for the younger of the two Larrabee sons, the feckless playboy, David (William Holden). He finally pays attention once she returns, all grown up, from two years at cooking school in Paris, even though she arrives just before his intended marriage to a socialite whose family interests will merge beautifully with the Larrabee empire. Elder brother Linus (Humphrey Bogart), eager for the match and its financial benefits, decides to intervene by courting Sabrina himself, but he ends up falling in love with her for real, much to his dismay.

I admit that I'm always bothered by the frequent decision to pair Hepburn with much older men, and it spoils some of my enjoyment, even if the leading man is as fine an actor as Humphrey Bogart (or Cary Grant or Fred Astaire). There's no ignoring the 30 year difference between Hepburn and Bogart in Sabrina; Bogart looks every year of it, especially when contrasted with the much younger Holden, who seems like a better match in spite of his bad habits. That said, Bogart's performance is still a Bogart performance, full of world weariness and lost chances that make Linus a sympathetic character even though he spends most of the movie deceiving Sabrina about his intentions. Holden is having a lot more fun as the younger brother, just like the baby of such a family would, but we know his track record with wives ought to be a warning about his ability to change for Sabrina. Neither brother is really a perfect match, but they're the only contenders on offer, since Sabrina apparently managed to spend two full years in Paris with only an elderly baron for company.

A fairy tale, however, isn't really about the princes; Sabrina Fairchild is the one we're meant to care about, and Hepburn is radiantly lovely in the role, full of wistful yearning and ardent feelings even after her transformative time in Paris. She comes back with sufficient sense of irony to name her pet poodle David but is still naive enough to fall for him all over again the minute she sees him. Once she returns to New York, Sabrina appears to advantage in beautiful clothes that suit Hepburn perfectly, but I like her just as much in the simple black outfit that she wears to Linus's office near the end. Like many other Cinderella heroines, Sabrina is motherless but enjoys the devotion of almost every member of the household, among whom we find familiar character actors like Ellen Corby and Nancy Kulp. Their enthusiasm for Sabrina's cause provides a nudge in case we need help overlooking her willingness to disrupt David's marriage, but they seem just as happy with Linus as long as Sabrina gets her promotion to American princess. Since Sabrina always maintains her romantic innocence, she never comes across as a Becky Sharp sort of opportunist, ready to hook either rich brother for the bank account he embodies, but I do wonder how a handsome young gardener or stable groom might have altered the course of this story.

Sabrina netted Oscar nominations for Hepburn as Best Actress and for Billy Wilder as Best Director, along with three additional nominations and a win for Best Costume Design, so there was no shortage of love for the picture from the Academy. Although she's best remembered for movies like Funny Face (1957), Breakfast at Tiffany's (1961), and My Fair Lady (1964), I particularly like her more dramatic performance in Wait Until Dark (1967), which brought her fifth and final nomination for Best Actress. For a more age appropriate romance with Humphrey Bogart, see him in The African Queen (1951) with that other iconic Hepburn, Katharine, or find Audrey and William Holden reunited for another round in Paris When It Sizzles (1964). Sabrina got the remake treatment in 1995 with Julia Ormond in the title role and Harrison Ford and Greg Kinnear as the smitten brothers, but you're better off with the original.

Posted by Jennifer Garlen at 2:42 PM