Classic Films in Focus: THE HORROR OF PARTY BEACH (1964) 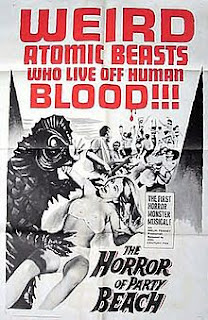 No genre lends itself to glorious badness like classic sci-fi horror, and director Del Tenney's The Horror of Party Beach (1964) makes for an excellent example of sublimely entertaining schlock. No, it isn't scary, thanks to stilted dialogue, flat acting, and some seriously DIY monster costumes, but it does wallow in the conventions of its type with gleeful abandon. If you enjoy really bad movies of the Mystery Science Theater 3000 variety, then The Horror of Party Beach is just your cup of radioactive monster-making sludge.

John Scott heads up a cast of unknowns as Hank Green, whose troublesome girlfriend, Tina (Marilyn Clarke), is the monsters' first victim. Hank doesn't seem to miss Tina; his scientist mentor's daughter, Elaine (Alice Lyon), readily jumps in as his new romantic interest, and the two set about trying to locate the monsters and destroy them before they kill off the entire town. Unfortunately, neither the scientist, Dr. Gavin (Allan Laurel), nor the local police can figure out how to defeat the creatures until dozens of residents have been killed, although the increasing body count doesn't seem to convince any of the locals to stay inside with the doors locked.

Monster movies are, of course, only as good as their monsters, and the weird ichthyoid menaces of this picture are very, very bad. Like Attack of the Giant Leeches (1959) and other B movies of this era, The Horror of Party Beach uses atomic age paranoia as its foundation, with plenty of pseudo-science to explain how its monsters come into existence. In this case, a boatload of radioactive waste spills over a shipwreck site, creating fish-headed freaks with human skeletons and a thirst for people's blood. The number of monsters increases over the course of the picture, but it's never clear if those are the transformed remnants of victims we see carried into the water or just more skeletons from the shipwreck. Dumping toxic waste into the ocean is definitely a bad idea, but even a ton of poisonous sludge would be hard-pressed to fuse marine life and human corpses in this fashion. The monsters have enormous fishy heads with mouths entirely unsuited to the drinking of human blood, and they're dumb enough to mistake shop mannequins for prey but smart enough to cover both exits at an ill-fated slumber party. Still, they have a certain silly charm, especially when bad actors run screaming from them in the dark.

None of the actors is good enough to warrant discussion, although the opening scenes with the biker gang are ridiculous and fun, and the obligatory beach party dancers seem to be having a good time in between murders. The Horror of Party Beach actually has enough dance numbers to qualify as a musical as well as a sci-fi horror film, with the Del-Aires performing half a dozen songs, including "Drag," "Elaine," and "The Zombie Stomp." They might actually be the most talented people involved with the whole picture, and they're certainly livelier than the wooden leads. The rest of the movie relies on cliches, casual sexism, and a very dated depiction of an African-American housemaid to keep things moving when the monsters aren't on screen. Fortunately, the creatures stay busy, attacking a slumber party, a car full of out-of-towners, a pair of drunks, and some shop girls walking home at night before anyone figures out that they're probably holed up at the deepest body of water in town.

The Horror of Party Beach has a 2.7 rating on IMDB, so let that be your warning about how bad a movie you're in for. It was, not surprisingly, the featured attraction on an episode of Mystery Science Theater 3000, but you won't need a professional peanut gallery to enjoy the absurd appeal of this film. Del Tenney's other notable contribution to cinema is The Curse of the Living Corpse (1964), which stars Roy Scheider of Jaws fame. For more mutated monsters, try Attack of the Crab Monsters (1957), Fiend without a Face (1958), and The Alligator People (1959).

Posted by Jennifer Garlen at 11:39 AM