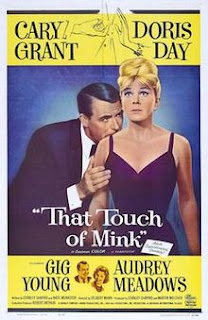 It's hard to imagine a more charming duo than Cary Grant and Doris Day, and That Touch of Mink (1962) is a perfectly entertaining example of their respective talents in the romantic comedy genre, even if both stars made more memorable outings in other pictures. Director Delbert Mann's comedy of errors is more upfront about sex - especially the extramarital kind - than many movies of the 40s or 50s could have dared, but it's all talk and no action as the protagonists constantly fail to consummate their intended tryst. Grant and Day have plenty of delightful comedic moments as the wealthy businessman and out-of-work single girl trying to get together in spite of their own moral objections, but the supporting cast also brings the laughs with fun performances by Gig Young, Audrey Meadows, John Astin, Dick Sargent, and John Fiedler.

Grant plays philanthropic tycoon and playboy bachelor Philip Shayne, who meets the energetic but unemployed Cathy Timberlake (Doris Day) after his luxury car splashes mud on her raincoat. When a smitten Philip proposes a romantic getaway, Cathy thinks he means marriage but then manages to talk herself into agreeing to a fling, against the advice of her roommate, Connie (Audrey Meadows). The affair, however, doesn't go as planned, with Philip and Cathy repeatedly trying to get together or calling it quits until Philip's friend, Roger (Gig Young), convinces Cathy that running off with an unsuitable suitor (John Astin) will shake Philip into a real proposal at last.

The leads are the main attraction, of course, with Grant giving a very fine late career performance and Day still in her prime. They're both a good bit older than their characters ought to be, but as a pair they look natural together, which a is a nice change from the many May-December couples of late 50s and early 60s romances. Day's Cathy is quite a hothead, which gives her plenty to do in her best scenes, especially when she gets the star players of the New York Yankees - including Mickey Mantle and Yogi Berra! - thrown out for arguing with the umpire. She's also horrified that people will know about her intended intimacy with Philip, and one of the funniest bits in the picture occurs when Cathy imagines that everyone knows as each conveyance she rides in becomes a bizarre replica of the bed where the deed is meant to be done. Grant's character unbends somewhat later in the picture, but when he finally takes off after Cathy and her pretend paramour he really gets to come undone. His appearance in nothing but a towel as he rushes to a taxi proves that late career Grant still has "it" in spades and makes the audience understand why Cathy might agree to that fling, morals notwithstanding.

Of the supporting players, Gig Young has the best part as Roger, Philip's friend and right hand man. Roger is a delightful mess, a neurotic alcoholic who wants to quit his job with Philip but is too in love with the luxurious life it brings. His unscrupulous therapist milks Roger for stock tips as well as hourly sessions, which gives rise to a running joke in the second half of the picture that might well come across as homophobic, even if the misunderstanding reflects much more on the therapist than Roger. Cathy's loyal friend Connie is perfectly played by Audrey Meadows, an actress best remembered for her TV role as Alice Kramden on The Honeymooners, and classic TV fans will also delight in seeing John Astin of The Addams Family as Cathy's sleazy suitor and Dick Sargent of Bewitched in a brief appearance. John Fiedler, a character actor with hundreds of roles but most beloved as the voice of Piglet in many Disney productions, has a small but funny part as a bridegroom whose marriage consummation is interrupted by a case of mistaken identity.

If you find Doris Day as irresistible as I do, check out some of her earlier work in Romance on the High Seas (1948), Calamity Jane (1953), or Pillow Talk (1959). Cary Grant made only three more films after That Touch of Mink, but Charade (1963) would be an enduring favorite with fans; Father Goose (1964) and Walk, Don't Run (1966) would follow as his final bows before retirement. Gig Young, who took that stage name from his character in The Gay Sisters (1942), also appears with Doris Day in Young at Heart (1954), Teacher's Pet (1958), and The Tunnel of Love (1958), but his talent for playing alcoholics on screen sprang from tragic familiarity with addiction in real life. For another gem from director Delbert Mann, see the truly captivating Marty (1955), which earned Mann the Oscar for Best Director.

Posted by Jennifer Garlen at 7:47 PM