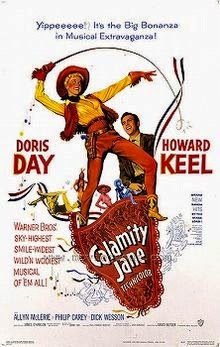 Calamity Jane (1953) transforms a Western legend into a frontier Cinderella story, complete with the requisite ball, but instead of a prince our heroine is out to land a handsome cavalry lieutenant. This Warner Brothers musical, directed by David Butler, can't be faulted for its lack of historical veracity, since the real Calamity Jane's story remains deeply buried in myths, half-truths, and self-aggrandizing lies, and its charm relies primarily on the spunky charisma of Doris Day as the rough but lovestruck protagonist. With Howard Keel as her costar, Day gives one of her signature performances, bringing the feisty heroine both liveliness and loveliness as the story unfolds.

As Calamity, Day whoops, fights, and sings her way around Deadwood, a wild frontier town where the men pine for Chicago stage star Adelaid Adams. Calamity goes to fetch the sexy chanteuse but accidentally brings back her maid, Katie Brown (Allyn McLerie), instead. After a rough start, Katie proves a hit, but Calamity is jealous when both her pal, Wild Bill Hickok (Howard Keel), and her crush, Lieutenant Danny Gilmartin (Philip Carey), try to court Katie.

Day is absolutely the star attraction here, and the buckskin costumes give her an opportunity to deliver an unusually physical performance as both a singer and a comedienne. As she rides, shoots, runs, and bounces through her scenes her energy is simply irresistible. Ironically, it's the slow, quintessentially feminine song, "Secret Love," that won the Oscar for Best Song, even though Day's more boisterous numbers, especially "The Deadwood Stage," are much more fun. Howard Keel is in his natural element as Day's leading man; the two sound very good together in their musical segments and have a feisty chemistry that telegraphs the inevitable ending. Allyn McLerie also makes an excellent partner and foil for Day, and the budding friendship between Katie and Calamity adds another layer to the story that Cinderella fantasies usually lack. Philip Carey has the least rewarding role of the four major players, since his Danny is no prince, and our final judgment of each character stems from his or ability to appreciate Calamity, which Danny never proves himself able to do.

The theme, the setting, and the presence of Keel recall the 1950 musical Annie Get Your Gun, in which Betty Hutton plays another Western legend, the sharpshooter Annie Oakley. In both movies, the rugged, uncultured heroines adopt conventional femininity in order to get their men, but Calamity Jane avoids the worst sins of the earlier story by having Calamity retain the essential elements of her character. Calamity doesn't give up her old identity or her scrappy frontier spirit. She adds dresses to her wardrobe but keeps pants, too, and her ability to inhabit both modes is particularly emphasized when she sings the sweetly romantic "Secret Love" while dressed in a buckskin pants outfit. The ending also promises a much more egalitarian marriage than that achieved in the Hutton film, in which Annie loses a shooting match on purpose because her man can't stand to be beaten by a woman. In both pictures, Howard Keel plays the leading man, but his Wild Bill has a far less fragile ego than his Frank Butler. While it takes a pretty dress to make Bill aware of it, his affection for Calamity has been there the whole time, and the picture's final moment makes it clear that Calamity has developed a characteristically possessive view of their new relationship.